All Will Be Well: A Memoir (Vintage International) (Paperback) 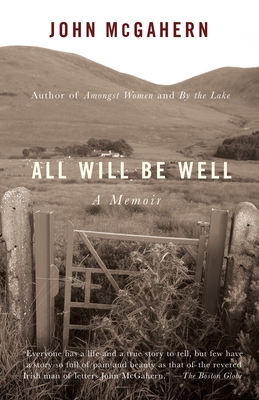 All Will Be Well: A Memoir (Vintage International) (Paperback)

From award-winning author John McGahern, a memoir of his childhood in the Irish countryside and the beginnings of his life as a writer.

McGahern describes his early years as one of seven children growing up in rural County Leitrim, a childhood was marked by his father’s violent nature and the early death of his beloved mother. Tracing the memories of home through both people and place, McGahern details family life and the beginnings of a writing career that would take him far from home, and then back again. Haunting and illuminating, All Will Be Well is an unforgettable portrait of Ireland and one of its most beloved writers.

John McGahern wrote six highly acclaimed novels and four collections of short stories, and was the recipient of many awards and honors, including an award from the Society of Author, the American Ireland Fund Literary Awards, the Prix Ecureuil de Littérature Etrangère and the Chevalier de L’Ordre des Arts et des Lettres. Amongst Women, which won both the GPA Book Award and the Irish Times Award, was shortlisted for the Booker Prize. He died in 2006.

“Powerful.... If you haven’t read McGahern, this is a good place to start, at the heart of a lyric grief and an embittering passion.”
—The New York Times Book Review

"Few have a story so full of pain and beauty as that of the revered Irish man of letters John McGahern."
—The Boston Globe

“McGahern seeks not to exploit his past but to understand it and to make it pertinent and meaningful to others.”
—The Washington Post Book World