The Temperature of Me and You (Paperback) 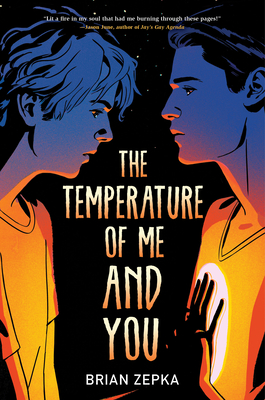 The Temperature of Me and You (Paperback)


Coming Soon - Available for Pre-Order Now
Sixteen-year-old Dylan Highmark thought his winter was going to be full of boring shifts at the Dairy Queen, until he finds himself in love with a boy who’s literally too hot to handle.

Dylan has always wanted a boyfriend, but the suburbs surrounding Philadelphia do not have a lot in the way of options. Then, in walks Jordan, a completely normal (and undeniably cute) boy who also happens to run at a cool 110 degrees Fahrenheit. When the boys start spending time together, Dylan begins feeling all kinds of ways, and when he spikes a fever for two weeks and is suddenly coughing flames, he thinks he might be suffering from something more than just a crush. Jordan forces Dylan to keep his symptoms a secret. But as the pressure mounts and Dylan becomes distant with his closest friends and family, he pushes Jordan for answers. Jordan’s revelations of why he’s like this, where he came from, and who’s after him leaves Dylan realizing how much first love is truly out of this world. But if the attraction between them defies the laws of physics, love may be the only thing that can keep Jordan and Dylan together.

THE TEMPERATURE OF ME AND YOU is the story of first love, and the lengths we’ll go to figure out our hearts. What starts as an electric, chance encounter at a Dairy Queen quickly evolves into a heated romance, a journey of trust and identity, and a ticking clock for survival.
Brian Zepka was born and raised in the suburbs of Philadelphia. Brian worked with the Centers for Disease Control and Prevention in Virginia where he provided support for programs addressing community health literacy and adolescent sexual health. He currently lives in Philadelphia and is a program evaluator for a nonprofit organization focused on chronic disease prevention. The Temperature of Me and You is his first novel.

A great LGBTQ+ young adult novel to warm up your winter.—Buzzfeed

A most anticipated YA book to read in January.—Epic Reads

A shimmering LGBTQ YA novel to illuminate winter nights.—Lambda Literary

As an average guy coping with things science can’t explain—love included—Dylan is an appealing character.—Publishers Weekly

One of the best young adult books coming in 2022.
—She Reads

One of the ten best young adult books arriving in 2022.—Seventeen Magazine

Readers who appreciate a well-told love at first sight story are the likeliest fans for this novel.—Bulletin of the Center for Children’s Books

The Temperature of Me and You catapults the notion of sizzling romance to a whole new fun level with both metaphoric and literal sparks, flames, and superhuman pyro-powers brightly burning in a smokin' hot story.—Alex Sanchez, author of Rainbow Boys and You Brought Me the Ocean

With so much heart, mystery, and sci-fi intrigue, Brian lit a fire in my soul that had me burning through these pages! Not only will the action have you on the edge of your seat, but the sparks flying between Dylan and Jordan will make you melt.—Jason June, NYT bestselling author of Out of the Blue