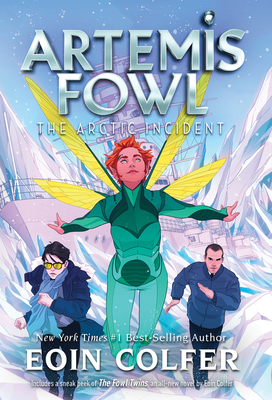 This is book number 2 in the Artemis Fowl series.

From New York Times best-selling author, Eoin Colfer comes his second book in the Artemis Fowl series about a teenage criminal mastermind and his siege against dangerous, tech-savvy fairies.
The internationally best-selling Artemis Fowl series inspired the movie, Artemis Fowl, now streaming on Disney+.
Artemis Fowl is at boarding school in Iceland when he receives an urgent video email from Russia.
It's a plea from his father, who has been kidnapped by the Russian mafia.
As Artemis rushes to his rescue, he is stopped by Captain Holly Short.
This time, instead of battling the fairies, he's going to have to join forces with them if he wants to save one of the few people he loves.
"The world that Colfer creates is as vivid and fantastical as any shire, gotham, or galaxy far, far away in recent memory." - Entertainment Weekly
Eoin Colfer is the New York Times best-selling author of eight books in the Artemis Fowl series and well as Iron Man: The Gauntlet, the WARP trilogy, Airman, Half Moon Investigations, The Supernaturalist,Eoin Colfer's Legend of... books, The Wish List,Benny and Omar; and Benny and Babe. He lives in Dublin, Ireland with his wife and two sons.

"Will grab your interest, no matter what your age."—The New York Post

PRAISE FOR THE ARCTIC INCIDENT

"The world that Colfer creates is as vivid and fantastical as any shire, gotham, or galaxy far, far away in recent memory."—Entertainment Weekly

PRAISE FOR THE ETERNITY CODE

PRAISE FOR THE OPAL DECEPTION

PRAISE FOR THE LOST COLONY

"Fast-paced, funny, and wholly enjoyable, the book is an action-packed thrill ride."—VOYA

PRAISE FOR THE TIME PARADOX

"The author once again offers an exhilarating ride through the fantastical world of Artemis Fowl."—School Library Journal

PRAISE FOR THE ATLANTIS COMPLEX

"Colfer keeps the action moving with laughs and gadgetry. . .A treat for series fans."—Booklist

PRAISE FOR THE LAST GUARDIAN

* "A fitting end to a brilliantly conceived and developed series."—Kirkus (starred review)