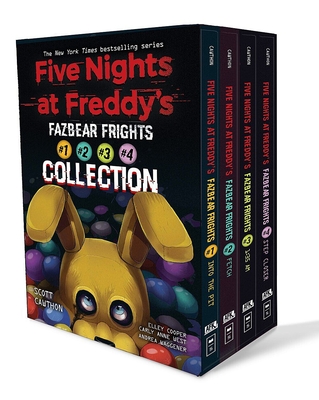 
Not in stock at store. Will, in most instances, ship from our warehouse in 7-10 days
The first four Five Nights at Freddy's: Fazbear Frights short story collections all in one box set!These four short story collections -- straight from the mind of Five Night's at Freddy's creator Scott Cawthon -- are full of original, spine-tingling tales sure to have even the bravest readers shivering with fear.Into the Pit: Oswald wishes his summer wasn't so boring, Sarah wishes to be beautiful, and Millie wishes she could just disappear from the face of the earth. But in the twisted world of Five Nights at Freddy's, their hearts' deepest desires have an unexpected cost.Fetch: Greg decides to put the controversial science he's been studying to the test. Alec launches a master plot to expose his golden sister for the spoiled brat he knows she is. And Oscar, ever the miniature grown-up his mom needs him to be, decides to take something he wants . . . even though he knows it's wrong. But as these three will learn, control is a fragile thing in the sinister world of Five Nights at Freddy's.1:35AM: Delilah escapes deeper into her dreams each night, in desperate need of a wake-up call. Stanley is newly dumped, stuck in a dead-end job for a mysterious employer, and unable to connect with anyone. And Devon, abandoned by his dad and ignored by his mom, can't understand why love and friendship come so easily to everyone except him. Unfortunately, in the callous world of Five Nights at Freddy's, it's always in the depths of loneliness that evil creeps in.Step Closer: Isolation can open up a void. Pete lashes out at his younger brother in the wake of his parents' divorce, falling prey to a gruesome curse. Kasey struggles with the lengths she'll go to survive on the streets after stealing a pair of unusual novelty glasses. Samantha and her sister, Susie, struggle to exist side by side, desperate to connect after a horrific tragedy. But in the grim world of Five Nights at Freddy's, empty feelings often attract hungry monsters...
Carly Anne West is the author of the YA novels The Murmurings and The Bargaining. She holds an MFA in English and Writing from Mills College and lives with her husband and two kids in Seoul, South Korea. Visit her at carlyannewest.com.
Elley Cooper writes fiction for young adults and adults. She has always loved horror and is grateful whenever she can spend time in a dark and twisted universe. Elley lives in Tennessee with her family and many spoiled pets and can often be found writing books with Kevin Anderson & Associates.
Kelly Parra is the author of YA novels Graffiti Girl, Invisible Touch, and other supernatural short stories. In addition to her independent works, Kelly works with Kevin Anderson & Associates on a variety of projects. She resides in Central Coast, California with her husband and two children.
Andrea Rains Waggener is an author, novelist, ghostwriter, essayist, short story writer, screenwriter, copywriter, editor, poet, and a proud member of Kevin Anderson & Associates’ team of writers. In a past she prefers not to remember much, she was a claims adjuster, JCPenney’s catalogue order-taker (before computers!), appellate court clerk, legal writing instructor, and lawyer. Writing in genres that vary from her chick-lit novel, Alternate Beauty, to her dog how-to book, Dog Parenting, to her self-help book, Healthy, Wealthy, & Wise, to ghostwritten memoirs to ghostwritten YA, horror, mystery, and mainstream fiction projects, Andrea still manages to find time to watch the rain and obsess over her dog and her knitting, art, and music projects. She lives with her husband and said dog on the Washington Coast, and if she isn’t at home creating something, she can be found walking on the beach.
Scott Cawthon is the author of the bestselling video game series Five Nights at Freddy's, and while he is a game designer by trade, he is first and foremost a storyteller at heart. He is a graduate of The Art Institute of Houston and lives in Texas with his family.