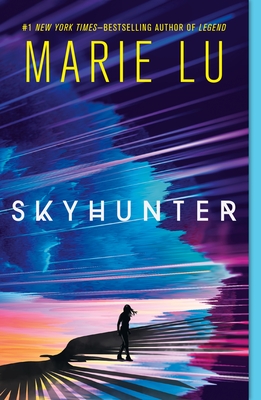 This is book number 1 in the Skyhunter Duology series.

A Quiet Place meets Attack on Titan in this unputdownable, adrenaline-laced novel.

Strikers are loyal. With unparalleled, deadly fighting skills. With a willingness to do anything—including sacrifice their own lives—to defend Mara, the world’s last free nation. But to the very people she protects, Talin is seen as an outcast first and a Striker second.

No matter what others think, Talin lets nothing distract her from keeping the evil Federation and its army of haunting, mutant beasts at bay. Until a mysterious prisoner shows up and disrupts Talin’s entire world. Is he a spy? A product of the Federation’s sinister experiments? The clock is ticking for Talin to unravel the prisoner’s secrets and discover whether he’s the weapon that will save—or destroy—them all.

Explore the chilling realities of war and the power of hope in Skyhunter, with slow burn romance and nonstop action that will have you racing to the end.

Marie Lu is the #1 New York Times–bestselling author of the Legend series, The Young Elites trilogy, the Warcross series. the Skyhunter series, Batman: Nightwalker, and The Kingdom of Back. She graduated from the University of Southern California and jumped into the video game industry, where she worked as an artist. A full-time writer, she spends her spare hours reading, drawing, playing games, and getting stuck in traffic. She lives in the traffic-jam capital, Los Angeles, with her illustrator/author husband, Primo Gallanosa, and their son.

"Paradoxes abound and readers will glory in them all." —Booklist

"Lu (The Kingdom of Back and Legend) creates a devastating, war-torn world, built upon the wreckage of a technologically advanced society. Readers will eagerly await a follow-up to this engrossing dystopian novel, which searingly interrogates traumas of war, immigration, and imperialism." —Publishers Weekly

"Lu ably balances lightning-fast action and stirring battles with romance, weaving in enough bits of cultural history to give the story some grounding... This hearty but small group of Talin, Red, and a few more allies face formidable odds in the next outing, and readers will likely eagerly await news on how they fare." — The Bulletin

"This tale of intrigue, alliances, and love will draw Legend fans and new readers into a fascinating world whose combined layers of privilege and surveillance draw comparisons to many present-day social ills." —Publishers Weekly

"Lu opts for a high simmer of intrigue in her sequel to Legend . . . taut and insightful.” —Publishers Weekly, starred review

“The well-drawn worlds, political undercurrents and the believability of the characters make it all feel fresh.” —Los Angeles Times

“Clear your calendar to allow yourself the luxury of reading this book in one or two sittings. You will be shaken.” —New York Journal of Books

“[Lu] has given this beautifully crafted series the ending it deserved.” —Booklist