The Startup Owner's Manual: The Step-By-Step Guide for Building a Great Company (Hardcover) 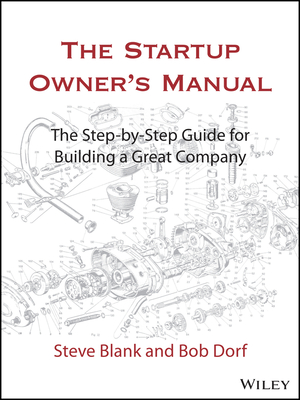 The Startup Owner's Manual: The Step-By-Step Guide for Building a Great Company (Hardcover)


Not in stock at store. Will, in most instances, ship from our warehouse in 7-10 days
More than 100,000 entrepreneurs rely on this book. The National Science Foundation pays hundreds of startup teams each year to follow the process outlined in the book, and it's taught at Stanford, Berkeley, Columbia and more than 100 other leading universities worldwide. Why?The Startup Owner's Manual guides you, step-by-step, as you put the Customer Development process to work. This method was created by renowned Silicon Valley startup expert Steve Blank, co-creator with Eric Ries of the Lean Startup movement and tested and refined by him for more than a decade. This 608-page how-to guide includes over 100 charts, graphs, and diagrams, plus 77 valuable checklists that guide you as you drive your company toward profitability. It will help you: - Avoid the 9 deadly sins that destroy startups' chances for success - Use the Customer Development method to bring your business idea to life - Incorporate the Business Model Canvas as the organizing principle for startup hypotheses - Identify your customers and determine how to get, keep and grow customers profitably - Compute how you'll drive your startup to repeatable, scalable profits.
The Startup Owner's Manual was originally published by K&S Ranch Publishing Inc. and is now available from Wiley. The cover, design, and content are the same as the prior release and should not be considered a new or updated product.
Steve Blank is a driving force in innovation, helping to radically reshape how startups are built and how entrepreneurship is taught. His new Startup Owner's Manual is his latest addition for entrepreneurial practitioners. Steve created the Customer Development methodology that spawned the Lean Startup movement. He teaches entrepreneurship at Stanford University, U.C. and Columbia. His blog, www.steveblank.com, is "must" reading among entrepreneurs. In 2011, Steve created the Lean LaunchPad, a hands-on class using Customer Development to train students as well as elite teams of scientists selected by the U.S. National Science Foundation. Steve arrived in Silicon Valley in 1978, as boom times began, joining his first of eight startups. After 21 years the results were two deep craters, several "base hits," one massive "dot-com bubble" home run, and immense experiential learning that resulted in his first break-through book, The Four Steps to the Epiphany. Bob Dorf is a serial entrepreneur, founding his first success at age 22 and, since then, six more--"two homeruns, two base hits, and three great tax losses," as he puts it. He's advised and/or invested in a score since. Dorf is often called the "midwife of Customer Development," having critiqued early drafts of The Four Steps to the Epiphany; he and Steve have been friends and colleagues ever since. Entrepreneurial from his teens, Bob received his last W-2 almost 40 years ago, when he quit his editor's job at New York's WINS Radio to launch his first successful startup. In his "spare" time, he teaches "Introduction to Venturing," on Customer Development and getting startups right, at Columbia Business School. For tons more insight and helpful tools for entrepreneurs and educators: www.steveblank.com