AUTISM - Behind The Locked Door: Understanding My Life as an Autistic (Paperback) 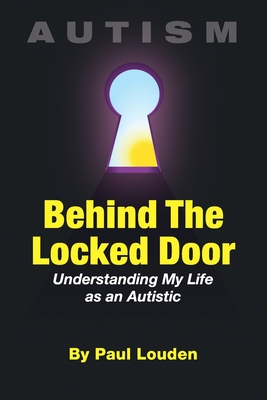 AUTISM - Behind The Locked Door: Understanding My Life as an Autistic (Paperback)

Do you have any idea what it's like to be a person with autism in 2018 and live in their world?

Paul Louden, an adult on the spectrum, provides astonishing and unique insights into how the world appears to him compared to those wired neuro-typically. He bravely shares personal and sometimes painful experiences to bridge understanding between those with autism and those without. Behind The Locked Door is a guide to understanding autism. And it will help readers more effectively communicate with people on the spectrum. Written for parents, educators, employers and for people eager to learn more about autism and disabilities, this book gives readers: - Practical insights into handling challenging communications barriers with people on the spectrum. - Insight into difficulties in life for people on the spectrum, including hygiene, social situations, speaking, motivation, trouble at school and work, and more. - Actionable steps for enjoying more successful relationships with people who have autism. - Behavioral techniques used by parents to help their children on the spectrum live a better life. Paul Louden has spent his entire life preparing to let the public inside the mind of a person with autism. Paul is a public speaker, radio show host, autism advocate and a 34-year-old man with autism. He works tirelessly to help educators, employers and parents better the lives of people with autism.
After struggles in high school, multiple attempts at college, and lack of success at maintaining even the most basic employment; Paul Louden never gave up. Through his perseverance, continued therapy, plus continued love and support from friends and family, Paul has demonstrated that we should never give up on adults on the autism spectrum. Today he is a noted public speaker, radio show host and autism advocate. He has consulted with major Fortune 500 corporations including Walmart, Barclay's, Northrop Grumman, Raytheon, and is an ongoing consultant to nonPareil Institute (one of the largest training programs for adults on the spectrum as well as one of their largest employers). As an adult on the autism spectrum, Paul is able to provide a unique perspective into the autistic mind. He truly believes that as a society we need to go beyond awareness and move toward understanding, which will lead to integration and ultimately the acceptance of people with Autism and all people with disabilities. Paul's popularity in the disability community has led to features in Autism World magazine and his own radio show broadcast from Houston, TX. Paul has also presented at disability conferences, both in the U.S and internationally, as he works to help businesses better understand how to interact with, hire and manage people with disabilities. Paul can be reached through his website: www.loudenonautism.com.