Bones Will Crow: An Anthology of Burmese Poetry (Paperback) 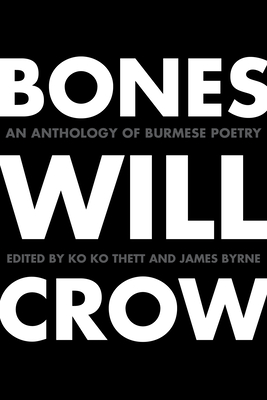 This is the first anthology of contemporary Burmese poets published in the United States and it includes the work of Burmese poets who have been in exile and in prison. The poems include global references from a culture in which foreign books and the Internet are regarded with suspicion and where censorship is an industry. The poets have been ingenious in their use of metaphor to escape surveillance and censorship, writing post-modern, avant-garde, performance, and online poetries.The anthology reveals the transition of Burmese poetry from traditionalism to modernism, as well as the development of Burmese poetry over the second half of the twentieth century, as Myanmar has changed. Through their wildly diverse styles, these poems delight in the freedom to experiment with poetic tradition.

ko ko thett grew up in Burma. By the early 1990s, he was thoroughly poeticized and politicized at Rangoon Institute of Technology. In 1996 he published and clandestinely distributed two uncensored chapbooks on the campus. He left the country in 1997 following a brief detention for his role in the December 1996 student uprising in Rangoon. ko ko thett has written extensively for several Burma journals and leading papers in Finland.
James Byrne is the editor and co-founder of The Wolf poetry magazine. His debut collection, Passages of Time, was published by Flipped Eye in 2003. Blood / Sugar is his second collection. He is also the co-editor of Voice Recognition: 21 Poets for the 21st Century, an anthology of British and Irish poets under 35, and The Collected Poems of Hope Mirrlees.

“This collection is important because these poems are a splendid counter to the current scholars' obsession with 'cultural authenticity' of national literatures. What we have got here is not so much just Burmese poetry as simply poetry (in the cosmopolitan sense) that happens to have been composed by Burmese in their language. It shows that Burma is part of the world and significantly part of World Literary Culture. The fact that we have both the Burmese language originals and the English translations (which are really lovely and wonderfully free of the usual attempt to ‘Burmanise~Buddhacise’ the English) makes the collection not only enjoyable to readers anywhere, but also of serious importance to scholarship on Burmese literature.” —F.K.L. Chit Hlaing, Emeritus Professor of Anthropology and Linguistics at the University of Illinois at Urbana-Champaign, Founding President of The Myanmar Studies Foundation, and Honorary Chair of the Myanmar Studies Group of the Association for Asian Studies “Bones will Crow is an illuminating account of real Myanmar narrated by uncensored and often deviant Burmese, who dare to dream and challenge the norms. Myanmar Studies scholars and literature fans often lament the lack of authentic Burmese voices in print, accessible to the world outside Burma. Bones will Crow not only fills this gap but also presents the readers a counter-narrative of 'exotic' Burma often associated with golden pagodas and smiling faces. Daily struggles under crony capitalism, confronting commercialization of female bodies, an exile's homesickness, issues Burmese grapple with leap out of the pages of this anthology. This anthology is a long overdue, much-welcomed addition to everyone interested in Myanmar and Burmese poetry.”—Tharapi Than, Assistant Professor, Department of Foreign Languages and Literatures, Northern Illinois University