Here and Nowhere Else: Late Seasons of a Farm and Its Family (Paperback) 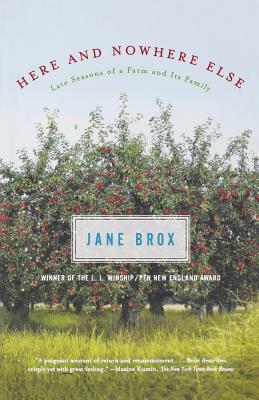 In her first book, which won the L. L. Winship/PEN New England Award, Jane Brox writes of going back to the farm where she grew up, to help her aging father and the troubled brother who works the land with him. She memorably captures the cadences of farm life and the people who sustain it, at a time when both are waning.

Jane Brox is the author of Here and Nowhere Else, which won the L.L. Winship/PEN New England Award, and Five Thousand Days Like This One, a finalist for the National Book Critics Circle Award.

“A poignant account of return and recommitment, darkened by the realization that her contract with the land might soon be broken . . . Brox describes crisply yet with great feeling.” —Maxine Kumin, The New York Times Book Review

“Arresting. With a poet's sensibility and an essayist's search for meaning, Brox gives us keen and sensuous observations of the land . . . The pen is used with compassion, honesty and restraint.” —Patti Doten, Boston Globe

“A strangely joyful book. [Brox] looks hard at what she sees . . . And implicit in the quality of her attention is a plea for patience, for the need to see the thing in the context of the time in which it lives.” —Amy Godine, Orion

“Brox subordinates dramas of personal longing and disappointment to the longer, larger story of an ancient vocation playing itself out between the implacabilities of nature on the one side and the American present on the other . . . [Her] quest suggests one part of Robert Frost--the effort to unite vocation and avocation, to make the fact the sweetest dram that labor knows.” —Franklin Burroughs, Southern Review