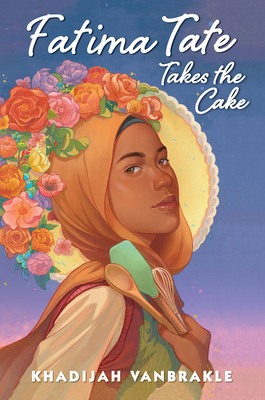 
Coming Soon - Available for Pre-Order Now
Fatima Tate wants to be a baker AND enjoy some innocent flirting with her hot friend Raheem—but her strict Muslim parents would never approve of either...

Seventeen-year-old Fatima Tate, aspiring baker (100% against her conservative parents’ wishes), leads a pretty normal life in Albuquerque: long drives with BFF Zaynab, weekly services at the mosque, big family parties, soup kitchen volunteering (the best way to perfect her flaky dough recipe!), stressing about college. But everything changes when she meets a charming university student named Raheem. Knowing the 'rents would FREAK, Fatima keeps their burgeoning relationship a secret... and then, one day, her parents and his parents decide to arrange their marriage. Amazing! True serendipity!

Except it's not amazing. As soon as the ring is on Fatima’s finger, Raheem’s charm transforms into control and manipulation. Fatima knows she has to call the whole thing off, but Raheem doesn’t like to lose. He threatens to reveal their premarital sexual history and destroy her and her family’s reputation in their tight-knit Muslim community. Fatima must find the inner strength to blaze her own trail by owning her body, her choices, and her future. Combining the frank authenticity of Elizabeth Acevedo and the complex social dynamics of Ibi Zoboi, FATIMA TATE TAKES THE CAKE is a powerful coming-of-age story that gives a much-needed voice to young Black Muslim women.
Khadijah VanBrakle is a proud New Mexican, mother of five, and Black Muslim woman. She is active in running her local SCBWI chapter and as an administrator at the Black Creators HQ, and she was also selected for the Highlights Foundation Muslim Storytellers Fellowship in 2021. She lives in Albuquerque with her family.