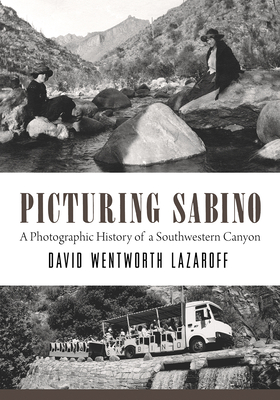 
Coming Soon - Available for Pre-Order Now
Sabino Canyon, a desert canyon in the American Southwest near Tucson, Arizona, is enjoyed yearly by thousands of city residents as well as visitors from around the world. Picturing Sabino tells the story of the canyon’s transformation from a barely known oasis, miles from a small nineteenth-century town, into an immensely popular recreation area on the edge of a modern metropolis. Covering a century of change, from 1885 to 1985, this work rejoices in the canyon’s natural beauty and also relates the ups and downs of its protection and enjoyment.

The story is vividly told through numerous historical photographs, lively anecdotes, and an engaging text, informed by decades of research by David Wentworth Lazaroff. Along the way the reader makes the acquaintance of ordinary picnickers as well as influential citizens who helped to reshape the canyon, while witnessing the canyon’s evolving relationship with its growing urban neighbor. The book will fascinate readers who are already familiar with Sabino Canyon, as well as anyone with an interest in local or regional history, or in historical photography.

David Wentworth Lazaroff is a Tucson writer and photographer. His most recent book is Amphibians, Reptiles, and Their Habitats at Sabino Canyon (with Philip C. Rosen and Charles H. Lowe Jr.).

“David Lazaroff has made a career of catching Sabino Canyon on film and its many stories on his pages. He probably bleeds creek water and knows each plant and bird by first name. No one knows Sabino like Lazaroff. Have but one day to spend outdoors? For nearly 150 years Tucsonans have chosen Sabino Canyon, and David Lazaroff’s Picturing Sabino shows us why. Meet you there tomorrow.”―Bill Broyles, co-author of Last Water on the Devil’s Highway

“This book is significant because it integrates a wealth of historic photographs and primary sources into an engaging narrative that connects the human history of Sabino Canyon with the growth and development of surrounding Tucson, the University of Arizona, and national events that influence this special canyon over a period of a hundred years. The author has created a human history of a spectacular geographic area. It includes individuals, families, organizations, and government entities that played a role in Sabino Canyon as identified through historic photographs and documents. The story begins in 1885, about the time Tucson residents discover Sabino Canyon, and ends a century later. It is a story not only of the canyon but of the growth of Tucson and its university. It is carefully researched and presents the stories of recreation developments—from simple picnics to New Deal–era facilities to the modern complexities of managing a special place.”―Patricia Spoerl, co-founder of the Oro Valley Historical Society