A Land Apart: The Southwest and the Nation in the Twentieth Century (The Modern American West ) (Paperback) 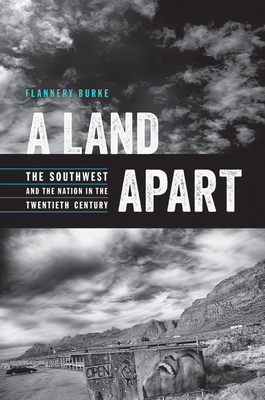 By Flannery Burke
$39.54
Backordered. Not in stock at store and may take a number of weeks to arrive.

A Land Apart is not just a cultural history of the modern Southwest—it is a complete rethinking and recentering of the key players and primary events marking the Southwest in the twentieth century. Historian Flannery Burke emphasizes how indigenous, Hispanic, and other non-white people negotiated their rightful place in the Southwest. Readers visit the region’s top tourist attractions and find out how they got there, listen to the debates of Native people as they sought to establish independence for themselves in the modern United States, and ponder the significance of the U.S.-Mexico border in a place that used to be Mexico. Burke emphasizes policy over politicians, communities over individuals, and stories over simple narratives.

Burke argues that the Southwest’s reputation as a region on the margins of the nation has caused many of its problems in the twentieth century. She proposes that, as they consider the future, Americans should view New Mexico and Arizona as close neighbors rather than distant siblings, pay attention to the region’s history as Mexican and indigenous space, bear witness to the area’s inequalities, and listen to the Southwest’s stories. Burke explains that two core parts of southwestern history are the development of the nuclear bomb and subsequent uranium mining, and she maintains that these are not merely a critical facet in the history of World War II and the militarization of the American West but central to an understanding of the region’s energy future, its environmental health, and southwesterners’ conception of home.

Burke masterfully crafts an engaging and accessible history that will interest historians and lay readers alike. It is for anyone interested in using the past to understand the present and the future of not only the region but the nation as a whole.

Flannery Burke is an associate professor of history at Saint Louis University. She is the author of From Greenwich Village to Taos: Primitivism and Place at Mabel Dodge Luhan’s.

“Burke’s book is a timely reminder that Hispanics, Natives, and other nonwhites have shaped the U.S. Southwest in multitudinous ways.”—Choice

“Land Apart: The Southwest and the Nation in the Twentieth Century is a must-read for those fascinated by the region, the significance of story, and the importance of perception by those who live within its boundaries as well as those who choose simply to visit.”—H-Net Reviews

“In this eloquent book, Flannery Burke brings the issue of race to the forefront of the Southwest’s regional identity.”—The Journal of Arizona History

“A unique, provocative approach to the history of the Southwest.”—Richard W. Etulain, author of Re-imagining the Modern American West: A Century of Fiction, History, and Art

“A fresh and deeply learned view of the Southwest’s twentieth-century history. Burke’s mastery of recent scholarship, delightful prose, and personal connection to the region add up to an impressive and important reinterpretation. Particularly important is her determination to emphasize the longstanding presence of Native and Hispanic people, on their terms.”—Sherry L. Smith, co-editor of Indians and Energy: Exploitation and Opportunity in the American Southwest