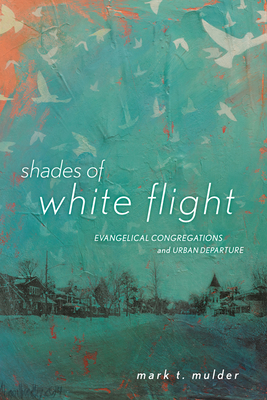 Since World War II, historians have analyzed a phenomenon of “white flight” plaguing the urban areas of the northern United States. One of the most interesting cases of “white flight” occurred in the Chicago neighborhoods of Englewood and Roseland, where seven entire church congregations from one denomination, the Christian Reformed Church, left the city in the 1960s and 1970s and relocated their churches to nearby suburbs. In Shades of White Flight, sociologist Mark T. Mulder investigates the migration of these Chicago church members, revealing how these churches not only failed to inhibit white flight, but actually facilitated the congregations’ departure.
Using a wealth of both archival and interview data, Mulder sheds light on the forces that shaped these midwestern neighborhoods and shows that, surprisingly, evangelical religion fostered both segregation as well as the decline of urban stability. Indeed, the Roseland and Englewood stories show how religion—often used to foster community and social connectedness—can sometimes help to disintegrate neighborhoods. Mulder describes how the Dutch CRC formed an insular social circle that focused on the local church and Christian school—instead of the local park or square or market—as the center point of the community. Rather than embrace the larger community, the CRC subculture sheltered themselves and their families within these two places. Thus it became relatively easy—when black families moved into the neighborhood—to sell the church and school and relocate in the suburbs. This is especially true because, in these congregations, authority rested at the local church level and in fact they owned the buildings themselves.
Revealing how a dominant form of evangelical church polity—congregationalism—functioned within the larger phenomenon of white flight, Shades of White Flight lends new insights into the role of religion and how it can affect social change, not always for the better.

MARK T. MULDER is an associate professor of sociology at Calvin College in Grand Rapids, Michigan.

"Mulder's study is an important effort that shows how congregational polity can have long-term neighborhood implications. Highly recommended."
— Choice

"A sobering wake-up call for American evangelicals to see how their faith played a hand in creating ghettos and oppressing others. Shades of White Flight is simply a must-read for those researching and working on the front lines of addressing racial inequality."
— Sociology of Religion

"Shades of White Flight serves as an excellent entry into this new and promising field of research."
— Review of Religious Research

"This micro-history brings attention to the need to consider the role of religious institutions in shaping attitudes about place, and therefore how they contribute to the shape of urban spaces in America."
— Journal for the Scientific Study of Religion

"Scholars of urban sociology, urban history, and religious institutions will find this book appealing as it sheds light on how evangelical Protestant denominations responded to urban demographic change. The book highlights the complicated role such churches play in urban neighborhoods."
— Journal of Urban Affairs

"Shades of White Flight is a fascinating book on race, religion, and urbanization that provides key insights on how a uniquely American brand of evangelicalism unintentionally contributed to 'white flight' in Chicago."
— Gerardo Martí

"A profound work. Mark Mulder, an astute observer of urban life and rising star in the field, opens our eyes to the role of religion in today’s intense segregation patterns and neighborhood disinvestment. I could not put this book down."
— Michael O. Emerson

"[Mulder's] s categories of polity, precedence, and place will prove useful guideposts to those wishing to undertake this task. The book should also serve as a cautionary tale for white evangelicals as they continue to make decisions about the location and relocation of their congregations."
— American Journal of Sociology