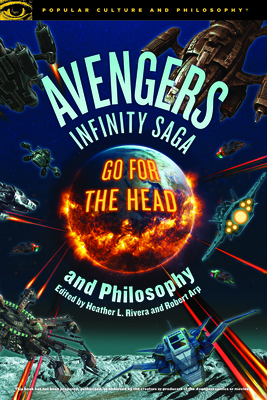 This is book number 131 in the Popular Culture and Philosophy series.

In Avengers Infinity Saga and Philosophy, philosophers explore the momentous issues and the fascinating puzzles raised by Marvel's compelling series of movies: ● Is the Thanos snap truly an answer to overpopulation and famine, or is it simply indefensible mass murder on a cosmic scale? ● Are the Avengers who try to stop Thanos dishing out justice or merely fighting a man who is himself just? ● Captain America or Tony Stark--which leader holds the key to a civilized society? ● Dr. Strange claims to sees 14,000,605 possible futures, in one of which Thanos is defeated. What does this tell us about the true nature of reality? ● Sometimes your best just isn't enough. How can we cope with inevitability? ● How can the Soul Stone and the Binding of Isaac by Abraham help us understand the Infinity War saga? ● Is Thanos a utilitarian? And if so, is his utilitarian calculus logically sound? ● Would it be possible for a group like the Avengers to amass enormous power to fight for humankind, without themselves becoming a corrupt ruling class? ● Can the past Nebula shooting the future Nebula cause her to cease to exist? Can you change the future by communicating with yourself or your family in the past? ● Can Thanos be seen as the epitome of non-self-serving behavior, or is Thanos masking his own egoism with the lie that his altruistic mission is to bring the universe into balance? ● Does Thanos show us the danger of living by an absolute moral compass, which allows us to see only what we believe to be "the right" with no variations or nuances?

Robert Arp has written and edited innumerable philosophy books, both scholarly and popular, including Hamilton and Philosophy: Revolutionary Thinking (2017), 1001 Ideas that Changed the Way We Think (2013), andScenario Visualization: An Evolutionary Account of Creative Problem Solving (2008). b>Heather L. Rivera teaches history at Louisiana State University Shreveport and is an independent philosophical writer who has interests in metaphysics, the Problem of Evil, and philosophy of mind. She is the co-editor (with Alexander E. Hooke) of The Twilight Zone and Philosophy (Open Court, 2019). She has written numerous philosophy articles and guest lectured at Suffolk County Community College on such topics as Cindy Sherman's Film Stills, Simulacra and Simulation by Jean Baudrillard, and Inception relating to Rene Descartes's Meditation on First Philosophy. She has given lectures annually on Evil, Pop Culture, and Philosophy at the Long Island Philosophical Society Conferences.