Madness Is Better Than Defeat (Paperback) 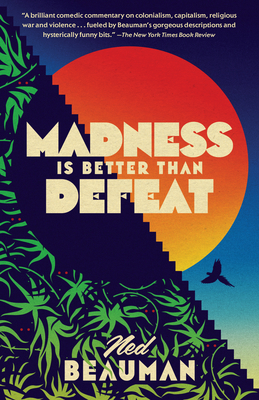 Madness Is Better Than Defeat (Paperback)

Beauman is one of the most creative writers working today! Two expeditions
arrive at a newly discovered temple in Honduras - one wants to take the
temple back to America, one wants to film a movie on location. A standoff
occurs. For years. Add in a touch of magical realism, a rogue CIA agent, a
shy British anthropologist, a Nazi on the run, an obsessed director...so
good!

— From Sarah B
In 1938, two rival expeditions descend on an ancient temple recently discovered in the jungles of Honduras, one intending to shoot a huge Hollywood production on location there, the other to disassemble the temple and ship it back to New York. A seemingly endless stalemate ensues. Twenty years later, a rogue CIA agent sets out to exploit the temple for his own ends, unaware that it is a locus of conspiracies far grander than anyone could ever have guessed.

Shot through with intrigue, ingenuity, and adventure, and showcasing Beauman’s riotous humor, spectacular imagination, and riveting prose, Madness Is Better Than Defeat is a novel without parallel: inventive, anarchic, and delightfully insane.
NED BEAUMAN was born in 1985 and studied philosophy at the University of Cambridge. He was included on Granta's 2013 list of the twenty best young British novelists, and his work has been translated into more than ten languages. He lives in London.

"Reminiscent of the Coen Brothers at their best, Madness Is Better Than Defeat is a strange, brilliant and satisfying trip to a more entertaining version of history."--Jaclyn Fulwood, Shelf Awareness

"Like an agent of the former British Empire, this book goes all over the world, gets in adventures, and maintains a tone of restraint even in tight spots--with comedic results. Take Graham Greene, add salaciousness and surreality, and you've got the undefeated madness that only Ned Beauman can deliver. A work of globe-trotting imagination, sex, violence and wit, told in an elegant style--an accomplishment that writers will study and readers will delight in."--Atticus Lish, author of Preparation for the Next Life

"Ned Beauman writes sentences so good I want to collect them, except that after a few pages I'm basically just transcribing the book. His newest novel is elegant, witty, precise and often hilarious. I didn't read it so much as savor it, word by word."--Charles Yu, author of How to Live Safely in a Science Fictional Universe