How the Hell Did This Happen?: The Election of 2016 (Hardcover) 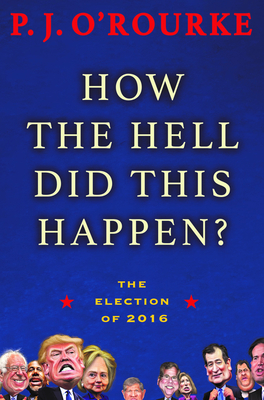 How the Hell Did This Happen?: The Election of 2016 (Hardcover)


Not in stock at store. Will, in most instances, ship from our warehouse in 7-10 days
This election cycle was so absurd that celebrated political satirist, journalist, and die-hard Republican P. J. O'Rourke endorsed Democratic candidate Hillary Clinton. As P.J. put it, "America is experiencing the most severe outbreak of mass psychosis since the Salem witch trials of 1692. So why not put Hillary on the dunking stool?" In How the Hell Did This Happen?, P.J. brings his critical eye and inimitable voice to some seriously risky business. Starting in June 2015, he asks, "Who are these jacklegs, high-binders, wire-pullers, mountebanks, swellheads, buncombe spigots, four-flushers and animated spittoons offering themselves as worthy of America's highest office?" and surveys the full cast of presidential candidates including everyone you've already forgotten and everyone you wish you could forget. P.J. offers a brief history of how our insane process for picking who will run for president evolved, from the very first nominating convention (thanks, Anti-Masonic Party) through the reforms of the Progressive era (because there's nothing that can't be worsened by reform) to the present. He takes us through the debates and key primaries and analyzes everything from the campaign platforms (or lack thereof) to presidential style ("Trump's appearance--indeed, Trump's existence--is a little guy's idea of living large. A private plane A swell joint in Florida Gold-plated toilet handles "). And he rises from the depths of despair to come up with a better way to choose a president. Following his come-to-Satan moment with Hillary and the Beginning of End Times in November, P.J. reckons with a new age: "America is experiencing a change in the nature of leadership. We're getting rid of our leaders. And we're starting at the top.
P. J. O'Rourke has written eighteen books on subjects as diverse as politics and cars and etiquette and economics. Parliament of Whores and Give War a Chance both reached #1 on the New York Times bestseller list. He is a contributing editor at the Weekly Standard, H. L. Mencken Research Fellow at the Cato Institute, a regular panelist on NPR's Wait Wait . . . Don't Tell Me, and editor-in-chief of the web magazine American Consequences. He lives in rural New England, as far away from the things he writes about as he can get.