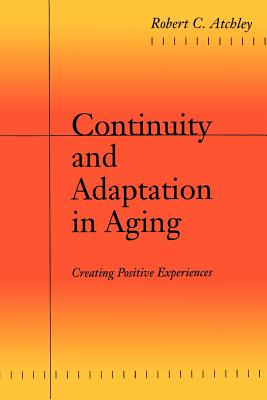 Despite the undeniable physical, psychological, and social effects of aging, most older persons cope quite well and find considerable satisfaction in their later years. Part of the explanation for this finding is based on what Robert C. Atchley calls continuity--the ability of older persons to maintain a strong sense of purpose and self in the face of the changes associated with aging. Continuity can help individuals evolve psychologically and socially in the presence of life events such as retirement, widowhood, and physical disability.

Atchley begins with a thorough explanation of continuity theory, identifying important methodological considerations in its evaluation and use. He then looks at evidence for continuity over time in the ways individuals interpret their experiences and make decisions regarding their living arrangements and lifestyles. He examines continuity as a personal goal that most people use to guide their development as individuals. Atchley finds that many aging adults add transcendence as a personal goal in later adulthood. In a concluding chapter, he revisits the basic elements of continuity theory, summarizing the evidence that supports it.

Drawing on data from a twenty-year longitudinal study that began with more than 1,200 individuals, Continuity and Adaptation in Aging explains one of the primary underlying forces that promotes effective adaptation to the aging process. This book will be of interest to researchers and students in gerontology and adult development.

Robert C. Atchley is a professor and chair of the Department of Gerontology at the Naropa Institute in Boulder, Colorado.