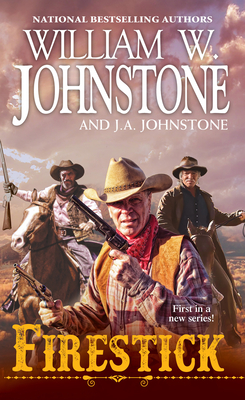 In this exciting new series, bestselling authors William W. Johnstone and J.A. Johnstone pay homage to America’s trail-hardened backwoodsmen who, like a fine grain whiskey, only get better with age . . .

In his mountain-man days, Elwood “Firestick” McQueen was practically a living legend. His hunting, tracking, and trapping skills were known far and wide. But it was his deadly accuracy with a rifle that earned him the Indian name “Firestick.” His two best buddies are Malachi “Beartooth” Skinner—whose knife was as fatal as a grizzly’s chompers—and Jim “Moosejaw” Hendricks, who once wielded the jawbone of a moose to crush his enemies in the heat of battle.

Of course, things are different nowadays. The trio have finally settled down, running a horse ranch in West Texas—and spending quality time with their lady friends. But if you think these old boys are ready for lives of leisure, think again . . .

Firestick is the town marshal. Beartooth and Moosejaw are his deputies. And when a hired gunman shows up with bullets blazing, these three hard-cases are ready to prove they aren’t getting older.

William W. Johnstone is the New York Times and USA Today bestselling author of over 300 books, including the series THE MOUNTAIN MAN; PREACHER, THE FIRST MOUNTAIN MAN; MACCALLISTER; LUKE JENSEN, BOUNTY HUNTER; FLINTLOCK; THOSE JENSEN BOYS; THE FRONTIERSMAN; SAVAGE TEXAS; THE KERRIGANS; and WILL TANNER: DEPUTY U.S. MARSHAL. His thrillers include BLACK FRIDAY, TYRANNY, STAND YOUR GROUND, and THE DOOMSDAY BUNKER. Visit his website at www.williamjohnstone.net or email him at dogcia2006@aol.com.

“Every day with Bill was an adventure story in itself. Bill taught me all he could about the art of storytelling. ‘Keep the historical facts accurate,’ he would say. ‘Remember the readers, and as your grandfather once told me, I am telling you now: be the best J.A. Johnstone you can be.’”