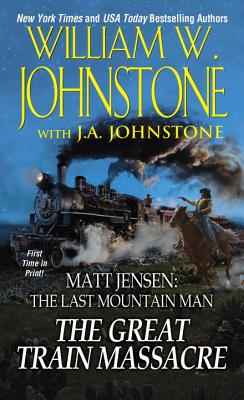 This is book number 10 in the Matt Jensen/Last Mountain Man series.

A train full of killers. Two passengers marked for death. And one legendary mountain man. Matt Jensen is in for the ride of his life. And it may be his last…

After surviving a brilliantly plotted murder attempt, the richest man in San Francisco is looking to hire the best protection money can buy. Enter Matt Jensen, who, for the princely sum of $5000, agrees to escort millionaire John Gillespie and his very fetching daughter on a railway journey from Frisco to Chicago. There’s just one catch: the world’s deadliest killers are coming along for the ride…

In Provo, Utah, a knife-wielding assassin leads Jensen on a life-or-death chase across the top of the train. In Cheyenne, Wyoming, a ruthless pair of hired guns climb on board, ready to kill anyone who gets in their way. And in Omaha, Nebraska, three more cutthroats join the party. It doesn’t take Matt Jensen long to realize this is no ordinary job. It’s a one-way ticket to hell…

“Every day with Bill was an adventure story in itself. Bill taught me all he could about the art of storytelling. ‘Keep the historical facts accurate,’ he would say. ‘Remember the readers, and as your grandfather once told me, I am telling you now: be the best J.A. Johnstone you can be.’”