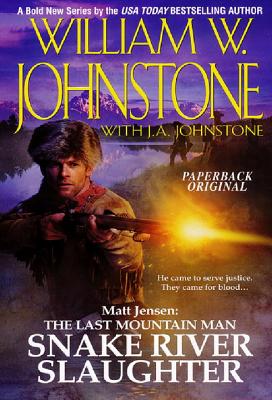 This is book number 5 in the Matt Jensen/Last Mountain Man series.

Matt Jensen is the adopted son of mountain man Smoke Jensen: his soul was forged by violence and hardship, his calling the sound of a gun. . .

Matt Jensen didn't want to kill two murderers in Wyoming but he had no choice. Now, his fame has reached into Idaho Territory where a woman Matt knew as a child in an orphanage is being hunted by predators. . . Kitty Wellington inherited her uncle's 20,000-acre ranch--and a mortgage--on the Snake River. She plans to pay her debt by selling thoroughbreds to the U.S. Army. But a relative is trying to steal it all. . .until Matt enters a fight whose most dangerous combatants have yet to show their hand.


Behind one man's evil plot is a small army of vicious killers masquerading as peace officers in Boise. For men who are used to getting their way, the odds in this fight look pretty good. . .until they meet Matt Jensen.

The real battle is about to begin.