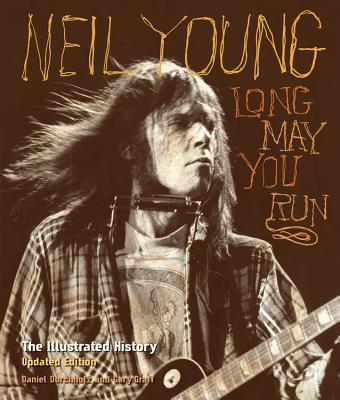 By Gary Graff, Daniel Durchholz
$30.00
Email or call for price.

Since his first recordings with Buffalo Springfield in 1967, Neil Young has been described as brilliant, cantankerous, confounding, ruthless, mercurial, and vexing. Regardless, his profound musical influence and his status as a critical favorite cannot be denied. Now the first illustrated biography to span Young’s 40-plus years as a recording and touring musician (and nearly as many forays into divergent musical genres, some wags might say), is updated through 2012.From Young’s earliest days in the Canadian folk and rock scenes through his tenures with Buffalo Springfield and CSN&Y and on to his varied solo career backed by bands including the Stray Gators, the Ducks, the Bluenotes, Booker T. & the MGs, Pearl Jam, and, of course, Crazy Horse, every aspect of Young’s long and varied career is covered. The book features the work of rock photographers from the 1960s to the present, as well as concert posters and ephemera from around the world, including picture sleeves, LPs, ticket stubs, pins, T-shirts, backstage passes, and more. Notable musicians from around the world chip in with commentary, and the book is further complemented with a discography and sidebars examining topics like Young’s involvement with Lionel toy trains (of which he is a part owner), Farm Aid, and San Francisco’s Bridge School.