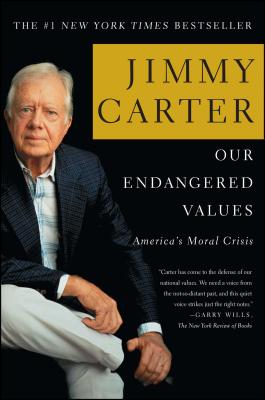 President Jimmy Carter offers a passionate defense of separation of church and state. He warns that fundamentalists are deliberately blurring the lines between politics and religion.

Jimmy Carter was the thirty-ninth President of the United States, serving from 1977 to 1981. In 1982, he and his wife founded The Carter Center, a nonprofit organization dedicated to improving the lives of people around the world. Carter was awarded the Nobel Peace Prize in 2002. He is the author of thirty books, including A Full Life: Reflections at Ninety; A Call to Action: Women, Religion, Violence, and Power; An Hour Before Daylight: Memoirs of a Rural Boyhood; and Our Endangered Values: America’s Moral Crisis.

"Carter offers an unusual combination: a man of faith and a man of power....By adding his own voice to the discussion, Carter reminds us of a time when religion was tied to such virtues as humility and such practices as soul-searching...he is undoubtedly one of our finest human beings."

"The prolific former president writes eloquently about how his faith has shaped his moral vision."

"Carter has come to the defense of our national values. We need a voice from the not-so-distant past, and this quiet voice strikes just the right notes."