Last Call: The Rise and Fall of Prohibition (Paperback) 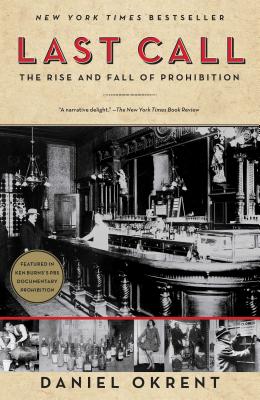 Last Call: The Rise and Fall of Prohibition (Paperback)

By Daniel Okrent
List Price: $19.99
Our Price: $19.00
(Save: $0.99 5%)
On our shelves now (while supplies last)
A brilliant, authoritative, and fascinating history of America’s most puzzling era, the years 1920 to 1933, when the US Constitution was amended to restrict one of America’s favorite pastimes: drinking alcoholic beverages.

From its start, America has been awash in drink. The sailing vessel that brought John Winthrop to the shores of the New World in 1630 carried more beer than water. By the 1820s, liquor flowed so plentifully it was cheaper than tea. That Americans would ever agree to relinquish their booze was as improbable as it was astonishing.

Yet we did, and Last Call is Daniel Okrent’s dazzling explanation of why we did it, what life under Prohibition was like, and how such an unprecedented degree of government interference in the private lives of Americans changed the country forever.

Writing with both wit and historical acuity, Okrent reveals how Prohibition marked a confluence of diverse forces: the growing political power of the women’s suffrage movement, which allied itself with the antiliquor campaign; the fear of small-town, native-stock Protestants that they were losing control of their country to the immigrants of the large cities; the anti-German sentiment stoked by World War I; and a variety of other unlikely factors, ranging from the rise of the automobile to the advent of the income tax.

Through it all, Americans kept drinking, going to remarkably creative lengths to smuggle, sell, conceal, and convivially (and sometimes fatally) imbibe their favorite intoxicants. Last Call is peopled with vivid characters of an astonishing variety: Susan B. Anthony and Billy Sunday, William Jennings Bryan and bootlegger Sam Bronfman, Pierre S. du Pont and H. L. Mencken, Meyer Lansky and the incredible—if long-forgotten—federal official Mabel Walker Willebrandt, who throughout the twenties was the most powerful woman in the country. (Perhaps most surprising of all is Okrent’s account of Joseph P. Kennedy’s legendary, and long-misunderstood, role in the liquor business.)

It’s a book rich with stories from nearly all parts of the country. Okrent’s narrative runs through smoky Manhattan speakeasies, where relations between the sexes were changed forever; California vineyards busily producing “sacramental” wine; New England fishing communities that gave up fishing for the more lucrative rum-running business; and in Washington, the halls of Congress itself, where politicians who had voted for Prohibition drank openly and without apology.

Last Call is capacious, meticulous, and thrillingly told. It stands as the most complete history of Prohibition ever written and confirms Daniel Okrent’s rank as a major American writer.
Daniel Okrent was the first public editor of The New York Times, editor-at-large of Time, Inc., and managing editor of Life magazine. He worked in book publishing as an editor at Knopf and Viking, and was editor-in-chief of general books at Harcourt Brace. He was also a featured commentator on two Ken Burns series, and his books include Last Call, The Guarded Gate, and Great Fortune, which was a finalist for the 2004 Pulitzer Prize in history. He lives in Manhattan and on Cape Cod with his wife, poet Rebecca Okrent.

"This is history served the way one likes it, with scholarly authority and literary grace. Last Call is a fascinating portrait of an era and a very entertaining tale."

“Last Call is--I can't help it--a high, an upper, a delicious cocktail of a book, served with a twist or two and plenty of punch.”

“A triumph. Okrent brilliantly captures the one glaring 'whoops!' in our Constitutional history. This entertaining portrait should stimulate fresh thought on the capacity and purpose of free government.”

“This is a marvelous and lively social history, one that manages to be both scholarly and exciting. Okrent takes us through a period of American history unlike any other. Fair-minded, insightful, and amused, he has a command of the material that makes the journey rewarding at every sober step of the way. I loved this book.”


--Lawrence Wright, author, The Looming Tower: Al-Qaeda and the Road to 9/11

“Daniel Okrent's Last Call is filled with delightful details, colorful characters, and fascinating social insights. And what a great tale! Prohibition may not have been a lot of fun, but this book sure is.”

“Daniel Okrent's Last Call fills a gaping void in American popular history that has been waiting for years to be filled, by providing a clear, sweeping, detailed and immensely readable account of Prohibition. His book is full of lively stories, incredible characters and fascinating research. It is, at once, great fun to read and solid history, a rare combination." –[trimmed quote still needsapproval]

—Michael Korda, author of Ulysses S. Grant, Ike, and With Wings Like Eagles