How the Brain Lost Its Mind: Sex, Hysteria, and the Riddle of Mental Illness (Hardcover) 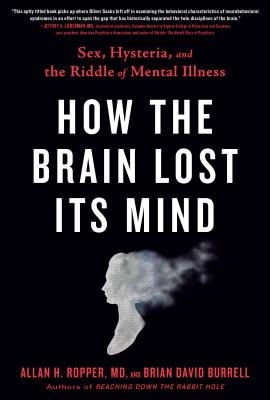 A noted neurologist challenges the widespread misunderstanding of brain disease and mental illness.

How the Brain Lost Its Mind tells the rich and compelling story of two confounding ailments, syphilis and hysteria, and the extraordinary efforts to confront their effects on mental life. How does the mind work? Where does madness lie, in the brain or in the mind? How should it be treated?

Throughout the nineteenth century, syphilis--a disease of mad poets, musicians, and artists--swept through the highest and lowest rungs of European society like a plague. Known as "the Great Imitator," it could produce almost any form of mental or physical illness, and it would bring down a host of famous and infamous characters--among them Guy de Maupassant, Vincent van Gogh, the Marquis de Sade, Friedrich Nietzsche, and Al Capone. It was the first truly psychiatric disease and it filled asylums to overflowing. At the same time, an outbreak of bizarre behaviors resembling epilepsy, but with no identifiable source in the body, strained the diagnostic skills of the great neurologists. It was referred to as hysteria.

For more than a century, neurosyphilis stood out as the archetype of a brain-based mental illness, fully understood but largely forgotten, and today far from gone. Hysteria, under many different names, remains unexplained and epidemic. These two conditions stand at opposite poles of the current debate over the role of the brain in mental illness. Hysteria led Freud to insert sex into psychology. Neurosyphilis led to the proliferation of mental institutions. The problem of managing the inmates led to the abuse of lobotomy and electroshock therapy, and ultimately the overuse of psychotropic drugs.

Today we know that syphilitic madness was a destructive disease of the brain while hysteria and, more broadly, many varieties of mental illness reside solely in the mind. Or do they? Afflictions once written off as "hysterical" continue to elude explanation. Addiction, alcoholism, autism, ADHD, Tourette syndrome, depression, and sociopathy, though regarded as brain-based, have not been proven to be so.

In these pages, the authors raise a host of philosophical and practical questions. What is the difference between a sick mind and a sick brain? If we understood everything about the brain, would we understand ourselves? By delving into an overlooked history, this book shows how neuroscience and brain scans alone cannot account for a robust mental life, or a deeply disturbed one.

Allan H. Ropper, M.D., is Professor of Neurology at Harvard Medical School and Raymond D. Adams Master Clinician of the Department of Neurology at Brigham and Women's Hospital. He is also a deputy editor of the New England Journal of Medicine and a fellow of the American Academy of Neurology, Royal College of Physicians, and the American College of Physicians. Dr. Ropper is an author of the most widely consulted textbook of neurology, Principles of Neurology, currently in its eleventh edition, and co-author with Brian David Burrell of Reaching Down the Rabbit Hole.

Brian David Burrell is a member of the mathematics faculty at the University of Massachusetts Amherst. A teacher and writer, he is the author is several books, including Postcards from the Brain Museum, The Words We Live By, and, jointly with Dr. Allan H. Ropper, Reaching Down the Rabbit Hole. He is an authority on brain collections worldwide, and has discussed his work on NBC's Today Show, C-SPAN's Booknotes, and NPR's Morning Edition.

“This aptly titled book picks up where Oliver Sacks left off in examining the behavioral characteristics of neurobehavioral syndromes in an effort to span the gap that has historically separated the twin disciplines of the brain, neurology, and psychiatry. In contrasting the organic (general paresis of the insane) with the ethereal (hysteria), this neuropsychiatric treatise brings the two divergent disciplines closer together without committing to their ultimate unification.”—Jeffrey A. Lieberman, MD, chairman of psychiatry at Columbia University Vagelos College of Physicians and Surgeons; Past President of the American Psychiatric Association; author of Shrinks: The Untold Story of Psychiatry

"Occasionally, a treatise arrives that challenges conventional reductionist notions that brain and mind can be unified through the neuroscience of the brain. Current brain analysis via brain scans, neural networks, genomic analysis, and psychopharmacology has not seduced Ropper and Burrell, who take the contrarian position that there is a subjective mental life that organizes itself. In an unusually readable and surprisingly lyrical account of syphilis, a surrogate for mental disorders caused by brain destruction, and hysteria, a stand-in for psychiatric disorders, they create a fascinating tension between neurology and psychiatry and offer thoughts on unifying the two fields of clinical medicine. Their original interpretations of Conrad’s Heart of Darkness and Thomas Mann’s Dr. Faustus alone makes the book worth reading as literary criticism."—Joseph B. Martin, MD, PhD, Dean Emeritus, Harvard Medical School

“A sweeping narrative of how the concept of mental illness evolved in the context of culture, history, and science. How the Brain Lost its Mind is written with wit and wisdom, and filled with vividly depicted colorful characters from Freud to Maupassant to the Marquis de Sade, from the physicians of nineteenth century Europe to the public health commissioners of 1930s New York. Ropper and Burrell trace the riveting history of the science of the mind and brain, revealing how and why neurology and psychiatry split, and how the future of medicine depends on their reunification.”—Aaron Berkowitz, MD, PhD, associate professor of neurology at Harvard Medical School; author of Clinical Neurology and Neuroanatomy and The Improvising Mind

“I have listened to, watched, and read Allan Ropper on subjects related to the brain for thirty years. He's still my teacher, but I've never seen him teach like this. Along with his friend and gifted co-author, Ropper takes us on a romp through centuries of cultural and scientific history. There's a kicker: can that history clarify and crystallize through the lens of just one nasty disease? Yes. Read how in this page-turningly accessible and brilliant book.”—Edison K. Miyawaki, MD, assistant professor of neurology at Harvard Medical School; author of The Frontal Brain and Language

“A thrilling journey from the dramatic common origins of neurology and psychiatry, through their historical divergence, to their current realignment.  The medical, scientific and social histories of two fascinating conditions are brilliantly interwoven and contrasted. Fascinating stories, masterfully told, bring to life the notable patients who suffered with these strange maladies, and the extraordinary doctors who treated them as they sought cures. This is essential and engaging reading for anyone who wants to understand these most interesting medical and philosophical issues, and how they have played out across continents and centuries.”—David Silbersweig, MD, chairman, Department of Psychiatry, co-director, Center for the Neurosciences, Brigham and Women’s Hospital; Stanley Cobb Professor of Psychiatry, Harvard Medical School

“A page-turner vividly depicting the struggles of medicine’s perennial sibling rivals: neurology and psychiatry. The dramatic interactions between clinical investigators and patients—occasionally one and the same—demonstrate how ideas relating mind to brain pervasively influence our sense of ourselves.”—Paul McHugh, MD, Chairman Emeritus of Psychiatry, Johns Hopkins University School of Medicine

"Through tales of eminent physicians and their suffering patients, replete with sex, drugs, and magnetically-induced hypnotism, we learn how a bacterium that deprived countless souls of their reason also helped scientists discover a role for brain biology in mental illness."—Alan Jasanoff, PhD, author of The Biological Mind; Professor of Biological Engineering, Brain & Cognitive Sciences, Nuclear Science & Engineering

“Know someone who has bizarre thoughts or strange behaviors? Ever wonder whether it means mental illness or a brain disease or both? Ropper and Burrell have written an insightful, fantastically readable analysis of what was once called ‘hysteria.’ Also, by studying how things can go wrong, we learn a great deal about the working of the human mind when things go right.”—Elizabeth Loftus, PhD, Distinguished Professor of Psychological Science, University of California, Irvine; author of Eyewitness Testimony

“It is remarkable how much influence syphilis has had on human history and how widespread the disease has been. Even today, the subject is generally off limits, which is why the story remains mostly unknown—and why How the Brain Lost Its Mind makes for compelling reading. Like all well written histories—and this one is very well written—the narrative engages like a mystery novel. But the story is true, and replete with sometimes salacious, sometimes revelatory details. Ultimately, it is the story of the beginning and development of the modern scientific study of the brain and the mind: the false leads and great discoveries, the charlatans and the heroes. The question of what is a disease of the brain and what is an illness of the mind remains undetermined even in our knowledgeable and enlightened era. A fascinating and sophisticated read."—Avi Nelson