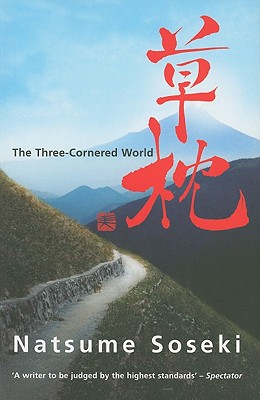 
May be on Backorder or may be Out of Print. May take a number of weeks to arrive if it arrives at all. We will confirm.
A key work in the Japanese transition from traditional to modern literature "Walking up a mountain track, I fell to thinking.
Approach everything rationally, and you become harsh. Pole along in the stream of emotions, and you will be swept away by the current. Give free rein to your desires, and you become uncomfortably confined. It is not a very agreeable place to live, this world of ours." Opening with the most famous introductory lines in Japanese literature, this novel has been cherished by generations of readers as a glittering jewel in the crown of Soseki's artistic achievement. A painter escapes to a mountain spa to work in a world free of emotional entanglement, but finds himself fascinated by the alluring mistress at his inn, and inspired by thoughts of Ophelia by Millais, he imagines painting her. The woman is rumored to have abandoned her husband and fallen in love with a priest at a nearby temple, but somehow the right expression for the face on the painting eludes the artist. Beautifully written, humorous, and filled with bittersweet reflections on the human condition, this work was intended as a unique "haiku-novel" with a mood utterly different to anything ever produced in the West. Demonstrating along the way a mastery of everything from Western painting to Chinese literature, Soseki succeeded in creating an artistic tour-de-force.
Natsume Soseki (1867–1916) is one of the great writers of the modern world. Educated at Tokyo Imperial University, he was sent to England in 1900 as a government scholar. As one of the first Japanese writers to be influenced by Western culture, his various works are widely read in Japan, and contemporary authors in Japan continue to be influenced by his oeuvre, which also includes The Gate, I Am a Cat, Kokoro, and Sanshiro.
"Soseki is the representative modern Japanese novelist, a figure of truly national stature."  —Haruki Murakami

"The greatest Japanese novelist of the modern period."  —Sunday Telegraph

"A writer to be judged by the highest standards. His works create, after the fashion of all great writers, a new and completely individual reality."  —Spectator