Entertainment Law: Music: (Or, How to Roll in the Rock Industry) (Paperback) 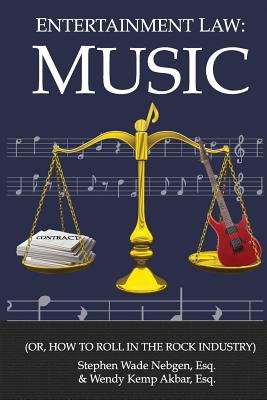 Entertainment Law: Music: (Or, How to Roll in the Rock Industry) (Paperback)


Not in stock at store. Will, in most instances, ship from our warehouse in 7-10 days
After publishing an initial version in January of 2015, this 2018 Edition comments on significant new cases, changes in the law, and the revolution of technology.The original purpose of the book remains the same: to provide an overview of the ever-changing music industry, the important legal considerations to keep in mind, and counsel on how best to manage a career. It is a guide, not a full legal treatise or commentary. Specifically, the book is structured to give the reader: (i) an introduction to intellectual property (copyright and trademark); (ii) how intellectual property can be turned into revenue (music publishing and royalties); (iii) how to identify and structure the most appropriate business entity for a given venture (LLC's, etc.); (iv) important concepts in contracts and the proper form of contracts (various performer agreements, band agreements, recording agreements); and (v) what happens when the band or collaboration dissolves. Both musicians and business people alike should find this book informative and useful.
STEPHEN WADE NEBGEN has over 40 years in the entertainment industry, first as a producer and then becoming an attorney with a specialty in entertainment law. His clients include film, television, and theater companies, musicians, actors, and artists. He counsels clients regarding business formation, intellectual property matters in copyright and trademarks, contract negotiations and other corporate matters. He has also been called upon as an "expert witness" regarding entertainment issues in various litigation matters. He teaches Entertainment Law at a number of universities and colleges and has lectured extensively on Entertainment Law matters at numerous seminars and symposiums. As a producer, among other credits, He was the General Manager at The Lambs Theatre located at 44th Street and Broadway, in NY City. Mr. Nebgen also produced such prominent Off-Broadway plays as the 20th Anniversary Revival of "Fortune and Men's Eyes" and "Bert See's The Light", which featured Jack Black in his New York theatre debut. Mr. Nebgen received his undergraduate degree from Fordham University in Religious Studies, graduating summa cum laude. He went on to earn his law degree from The University of Texas School of Law and co-founded The Texas Review of Entertainment and Sports Law. WENDY KEMP AKBAR represents clients in all aspects of intellectual property, particularly patent infringement and invalidity litigation, trademark, trade dress and copyright litigation, Lanham Act, unfair competition, trade secret, false advertising and licensing disputes. She also advises and assists clients on transactional intellectual property matters, and helps companies to identify, protect, license and audit their intellectual property assets. is AV Preeminent rated by Martindale-Hubbell, representing the highest rating in legal ability and ethical standards. She has been recognized as a "Southwest Super Lawyer Rising Star" each year since 2012, an honor given to only 2.5 % of eligible Arizona attorneys, and has been named one of Arizona's Top Rated Attorneys. She has appeared in courts throughout the country - including in Arizona, New York, California, Wisconsin, New Jersey, Texas, Nevada, Illinois and Delaware - in intellectual property and other disputes, including bench and jury trials and arbitration. Ms. Akbar obtained her Jurist Doctorate degree from the University of Pennsylvania Law School and her undergraduate degree from Swarthmore College with High Honors.