The Battle for Yellowstone: Morality and the Sacred Roots of Environmental Conflict (Princeton Studies in Cultural Sociology #66) (Hardcover) 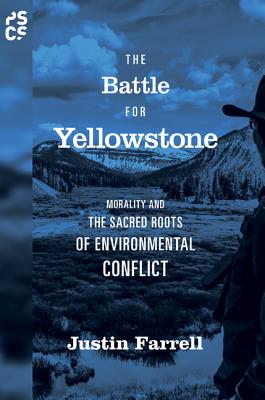 The Battle for Yellowstone: Morality and the Sacred Roots of Environmental Conflict (Princeton Studies in Cultural Sociology #66) (Hardcover)

This is book number 66 in the Princeton Studies in Cultural Sociology series.

Yellowstone holds a special place in America's heart. As the world's first national park, it is globally recognized as the crown jewel of modern environmental preservation. But the park and its surrounding regions have recently become a lightning rod for environmental conflict, plagued by intense and intractable political struggles among the federal government, National Park Service, environmentalists, industry, local residents, and elected officials. The Battle for Yellowstone asks why it is that, with the flood of expert scientific, economic, and legal efforts to resolve disagreements over Yellowstone, there is no improvement? Why do even seemingly minor issues erupt into impassioned disputes? What can Yellowstone teach us about the worsening environmental conflicts worldwide?Justin Farrell argues that the battle for Yellowstone has deep moral, cultural, and spiritual roots that until now have been obscured by the supposedly rational and technical nature of the conflict.
Tracing in unprecedented detail the moral causes and consequences of large-scale social change in the American West, he describes how a "new-west" social order has emerged that has devalued traditional American beliefs about manifest destiny and rugged individualism, and how morality and spirituality have influenced the most polarizing and techno-centric conflicts in Yellowstone's history.This groundbreaking book shows how the unprecedented conflict over Yellowstone is not all about science, law, or economic interests, but more surprisingly, is about cultural upheaval and the construction of new moral and spiritual boundaries in the American West.

Justin Farrell is assistant professor of sociology in the School of Forestry and Environmental Studies at Yale University.