The Death and Life of Great American Cities (Hardcover) 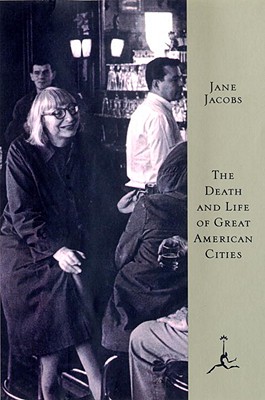 By Jane Jacobs, Jason Epstein (Introduction by)
$23.00
May be on Backorder or may be Out of Print. May take a number of weeks to arrive if it arrives at all. We will confirm.

Thirty years after its publication, The Death and Life of Great American Cities was described by The New York Times as "perhaps the most influential single work in the history of town planning....[It] can also be seen in a much larger context.  It is first of all a work of literature; the descriptions of street life as a kind of ballet and the bitingly satiric account of traditional planning theory can still be read for pleasure even by those who long ago absorbed and appropriated the book's arguments."  Jane Jacobs, an editor and writer on architecture in New York City in the early sixties, argued that urban diversity and vitality were being destroyed by powerful architects and city planners.  Rigorous, sane, and delightfully epigrammatic, Jacobs's small masterpiece is a blueprint for the humanistic management of cities.  It is sensible, knowledgeable, readable, indispensable.  The author has written a new foreword for this Modern Library edition.

Jane Jacobs was born on May 4, 1916, in Scranton, Pennsylvania. Her father was a physician and her mother taught school and worked as a nurse. After high school and a year spent as a reporter on the "Scranton Tribune," Jacobs went to New York, where she found a succession of jobs as a stenographer and wrote free-lance articles about the city's many working districts, which fascinated her. In 1952, after a number of writing and editing jobs ranging in subject matter from metallurgy to a geography of the United States for foreign readers, she became an associate editor of "Architectural Forum." She was becoming increasingly skeptical of conventional planning beliefs as she noticed that the city rebuilding projects she was assigned to write about seemed neither safe, interesting, alive, nor good economics for cities once the projects were built and in operation. She gave a speech to that effect at Harvard in 1956, and this led to an article in "Fortune" magazine entitled "Downtown Is for People," which in turn led to "The Death and Life of Great American Cities." The book was published in 1961 and produced permanent changes in the debate over urban renewal and the future of cities.

In opposition to the kind of large-scale, bulldozing government intervention in city planning associated with Robert Moses and with federal slum-clearing projects, Jacobs proposed a renewal from the ground up, emphasizing mixed use rather than exclusively residential or commercial districts, and drawing on the human vitality of existing neighborhoods: "Vital cities have marvelous innate abilities for understanding, communicating, contriving, and inventing what is required to combat their difficulties.... Lively, diverse, intense cities contain the seeds of their own regeneration, with energy enough to carry over for problems and needs outside themselves." Although Jacobs's lack of experience as either architect or city planner drew criticism, "The Death and Life of Great American Cities" was quickly recognized as one of the most original and powerfully argued books of its day. It was variously praised as "the most refreshing, provocative, stimulating, and exciting study of this greatest of our problems of living which I have seen" (Harrison Salisbury) and "a magnificent study of what gives life and spirit to the city" (William H. Whyte).

Jacobs is married to an architect, who she says taught her enough to become an architectural writer. They have two sons and a daughter. In 1968 they moved to Toronto, where Jacobs has often assumed an activist role in matters relating to development and has been an adviser on the reform of the city's planning and housing policies. She was a leader in the successful campaign to block construction of a major expressway on the grounds that it would do more harm than good, and helped prevent the demolition of an entire neighborhood downtown. She has been a Canadian citizen since 1974. Her writings include "The Economy of Cities" (1969); "The Question of Separatism" (1980), a consideration of the issue of sovereignty for Quebec; "Cities and the Wealth of Nations" (1984), a major study of the importance of cities and their regions in the global economy; and her most recent book, "Systems of Survival" (1993).

"The most refreshing, provacative, stimulating and exciting study of this [great problem] which I have seen. It fairly crackles with bright honesty and common sense."—Harrison Salisbury, The New York Times"One of the most remarkable books ever written about the city... a primary work. The research apparatus is not pretentious—it is the eye and the heart—but it has given us a magnificent study of what gives life and spirit to the city."—William H. Whyte, author of The Organization Man