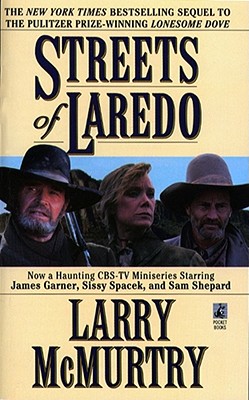 By Larry McMurtry
$8.99
May be on Backorder or may be Out of Print. May take a number of weeks to arrive if it arrives at all. We will confirm.

In the long-awaited sequel to Lonesome Dove, Larry McMurtry spins an exhilarating tale of legend and heroism. Captain Woodrow Call, Augustus McCrae's old partner, is now a bounty hunter hired to track down a brutal, young Mexican bandit. Riding with Call are an Eastern city slicker, a witless deputy, and one of the last members of the Hat Creek outfit, Pea Eye Parker, now married to Lorena -- once Gus McCrae's sweetheart. Their long chase leads them across the last wild stretches of the West into a hellhole known as Crow Town, and finally, into the vast, relentless plains of the Texas frontier.

"Streets of Laredo is a splendid addition to the literary portrait of McMurtry's native Texas and the West that he has been creating for three decades. It's also one of his most affectingly melancholy books. . . . The characters are as finely etched as any McMurtry has ever minted."--Newsweek


"Gorgeous . . . violent, funny, achingly sad, filled with heroism and regret . . . If you can put Streets of Laredo down, I'll eat my ten-gallon hat."--Cosmopolitan

"A marvelous novel in its own right and in every way a worthy successor to Lonesome Dove."--Chicago Tribune


"One of McMurtry's most powerful and moving achievements."--Los Angeles Times


"Larry McMurtry remains a genius at dialogue. The scene where the seven whores start reminiscing about the first men in their lives in wonderful."--New York Times Book Review


"Larry McMurtry is a wonderful storyteller, and with . . . Streets of Laredo. . . he has written a novel that is even better than the original--and that was one hell of a tale."--Boston Globe


“Streets of Laredo is here and all that needs to be said is this: Hallelujah. . . . McMurtry has taken us back to the glory days of Lonesome Dove. . . .”--Los Angeles Daily News