Suck On This Year: LYFAO @ 140 Characters or Less (Hardcover) 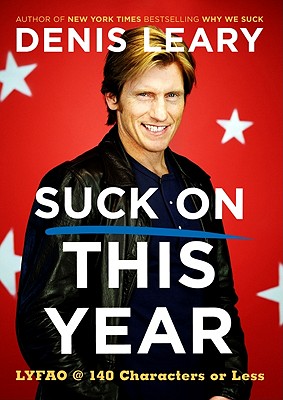 By Denis Leary
$18.00
May be on Backorder or may be Out of Print. May take a number of weeks to arrive if it arrives at all. We will confirm.

One of America's most original and biting comic satirists, Denis Leary turns his irreverent eye and scathing humor on everything you love and cherish-and now he does it with a hilarious, illustrated collection of Tweets Like a quiver full of arrows, "Suck On This Year"'s barbs will hit you where it hurts-and you'll love it.

Denis Leary has appeared in more than thirty films, including the Oscar-nominated "Wag the Dog," "The Thomas Crowne Affair," and "Ice Age," as well as the Christmas cult classic "The Ref," and such indie favorites as "Jesus' Son" and "Suicide Kings." Leary was the co-creator, producer, and star of the critically acclaimed network comedy "The Job." His one-man shows "No Cure For Cancer" and "Lock 'n Load" broke viewing records on HBO. Leary has also written for "New York Magazine," "GQ," "Playboy," "Esquire," and many other publications. He is the co-writer, creator, and star of the four-time Emmy and Golden Globe nominated television series "Rescue Me." He lives in Connecticut."