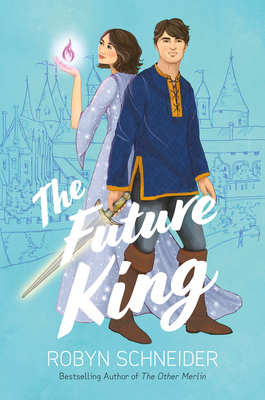 This is book number 2 in the Emry Merlin series.

Welcome back to the great kingdom of Camelot! Scandal, betrayal, and courtly crushes abound in this highly anticipated sequel to The Other Merlin, one of Publishers Weekly’s Best Books of the Year!

Emry Merlin should be living her best life as a wizard’s apprentice. Now that she no longer has to pretend to be her brother to study magic, she and Prince Arthur are closer than ever. Except King Uther has warned her to stay away from his son, and Emry’s magic is growing more unpredictable by the day.

Meanwhile, Arthur’s prophesied future as the One True King is closing in. And as his wedding to Princess Guinevere draws nearer, he discovers she’s hiding a shocking secret. When Emry learns that the only hope to fix her increasingly dangerous magic is an eccentric Parisian alchemist, Arthur has his own reasons for accompanying her to French court, and for befriending an infamous crowd of young nobles.

But it’s going to take a lot more than a depressed gargoyle, some obscenely tight trousers, and a deadly sports match to keep our young heroes from their destiny. Can these reluctant royals and wayward wizards set aside their drama and save their kingdom, or is Camelot doomed?
Robyn Schneider grew up in Southern California, where she spent her childhood reading fantasy novels and searching for secret passages. She’s a graduate of Columbia University, where she studied creative writing, and the University of Pennsylvania Perelman School of Medicine, where she earned a Masters of Bioethics. Robyn is the bestselling author of The Other Merlin, The Beginning of Everything, Extraordinary Means, Invisible Ghosts, and You Don’t Live Here. Her work is available across the world in over a dozen languages. She lives in Los Angeles with her TV producer husband, their tiny puppy, and far too many books.