Midnight in Washington: How We Almost Lost Our Democracy and Still Could (Paperback) 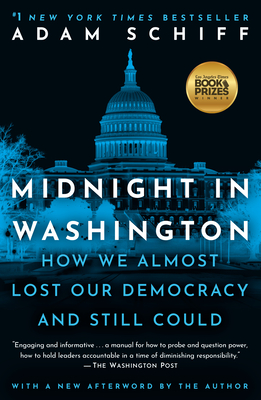 Midnight in Washington: How We Almost Lost Our Democracy and Still Could (Paperback)


Not in stock at store. Will, in most instances, ship from our warehouse in 7-10 days
#1 NEW YORK TIMES BESTSELLER • The vital inside account of American democracy in its darkest hour, from the rise of autocracy unleashed by Trump to the January 6 insurrection, and a warning that those forces remain as potent as ever—from the congressman who led the first impeachment of Donald J. Trump

“Engaging and informative . . . a manual for how to probe and question power, how to hold leaders accountable in a time of diminishing responsibility.”—The Washington Post

With a new afterword by the author

In the years leading up to the election of Donald Trump, Congressman Adam Schiff had already been sounding the alarm over the resurgence of autocracy around the world, and the threat this posed to the United States. But as he led the probe into Donald Trump’s Russia and Ukraine-related abuses of presidential power, Schiff came to the terrible conclusion that the principal threat to American democracy now came from within.

In Midnight in Washington, Schiff argues that the Trump presidency has so weakened our institutions and compromised the Republican Party that the peril will last for years, requiring unprecedented vigilance against the growing and dangerous appeal of authoritarianism. The congressman chronicles step-by-step just how our democracy was put at such risk, and traces his own path to meeting the crisis—from serious prosecutor, to congressman with an expertise in national security and a reputation for bipartisanship, to liberal lightning rod, scourge of the right, and archenemy of a president. Schiff takes us inside his team of impeachment managers and their desperate defense of the Constitution amid the rise of a distinctly American brand of autocracy.

Deepening our understanding of prominent public moments, Schiff reveals the private struggles, the internal conflicts, and the triumphs of courage that came with defending the republic against a lawless president—but also the slow surrender of people that he had worked with and admired to the dangerous immorality of a president engaged in an historic betrayal of his office. Schiff’s fight for democracy is one of the great dramas of our time, told by the man who became the president’s principal antagonist. It is a story that began with Trump but does not end with him, taking us through the disastrous culmination of the presidency and Schiff’s account of January 6, 2021, and how the antidemocratic forces Trump unleashed continue to define his party, making the future of democracy in America more uncertain than ever.
Adam Schiff is the United States Representative for California’s 28th Congressional District. In his role as Chairman of the House Permanent Select Committee on Intelligence, Schiff led the first impeachment of Donald J. Trump. Before he served in Congress, he worked as an Assistant U.S. Attorney in Los Angeles and as a California State Senator. He and his wife, Eve, have two children, Alexa and Elijah.

“Midnight in Washington is more than just Schiff’s damning recitation of Trumpian offenses against American institutions. It is, overwhelmingly, a rebuke of Republican lawmakers and administration officials for letting it all happen, for failing to stand up to Trump . . . [A]n engaging and informative read . . . Midnight in Washington is a manual for how to probe and question power, how to hold leaders accountable in a time of diminishing responsibility.”—The Washington Post

“[Schiff’s] new book, Midnight in Washington, is a stunning look at what the Trump years have done to us as human beings. And Congressman Schiff’s argument about where we go from here is that it is only human agency—the willingness of individual people to be brave and speak truth to power, and bear the consequences of it—that is the only thing that will get us out of what remains an existential danger to us as a democracy. This was a fascinating read, and an exception to the politicians don’t write good books rule.”—Rachel Maddow

“When American democracy faced a near-death experience, Adam Schiff served as an able guardian, protecting our nation from enemies foreign and domestic. Schiff not only provides riveting details in this compelling account, he delivers a much-needed warning about the threats facing America from within and an urgent how-to guide for preserving our nation.”—Stacey Abrams, founder of Fair Fight Action

“Schiff used his confinement to write a memoir which offers a beguiling mix of the personal and political. Midnight in Washington is full of new details about investigations of the president's treason and how the House speaker, Nancy Pelosi, and the rest of the Democratic caucus decided impeachment was necessary and should convince a few million more that everything he said about Trump was true--and that the country was exceptionally lucky to have him ready and willing to defend the tattered concept of ‘truth.’”—The Guardian

“Schiff is one of the first to try to account for the last five, tumultuous years in American politics. As the chairman of the House Intelligence Committee and a top lieutenant to House Speaker Nancy Pelosi, Schiff is well positioned to deliver insights on the time of Trump, at least from the perspective of a Democratic insider. Midnight in Washington delivers on that promise. . . . A blistering indictment of Trump and his Republican enablers set alongside a what-I-saw-at-the-revolution account of Schiff’s role investigating Trump’s misdeeds.”—The New York Times

“History and truth demand that we not allow Republicans to whitewash the Trump presidency. Having Schiff's well written record will prove indispensible as they try to. One of the achievements of Schiff's book is the way it weaves together the many disparate threads of a complicated tale that unfolded over several years midway through Trumps term.”—Los Angeles Times

“I’ve had the privilege of reading Adam Schiff's magnificent book in the past few days. Nothing else out there captures as vividly and brilliantly how close we came to losing our way of life and the peril we still face, but why we need not despair and have every reason for hope.”—Laurence Tribe

“If there is still an American democracy fifty years from now, historians will be very grateful for this highly personal and deeply informed guide to one of its greatest crises. We should be grateful that we can read it now.”—Timothy Snyder, #1 New York Times bestselling author of On Tyranny

“Although he failed to secure the conviction of Donald Trump in the first impeachment trial, Adam Schiff has now vanquished him forever in these pages. This book will stand as the touchstone of truth against any attempts to distort or rewrite this crucial piece of history. Congressman Schiff has restored our faith in the nobility of public service and has shown what one dedicated patriot—courageous, intelligent, and fearless—can still accomplish even in a divided country.”—Ron Chernow, Pulitzer Prize–winning author of Washington: A Life and Alexander Hamilton

“Adam Schiff has performed a great public service with this engrossing and illuminating new book. By taking us inside the impeachments of the forty-fifth president, Schiff has written an important first draft of history—history that is not remote or retrospective but all too immediate, for the threats to the republic he so deftly describes remain with us. If you care about American democracy, the rule of law, and the future of our imperiled nation, this is essential reading.”—Jon Meacham, Pulitzer Prize–winning author of American Lion: Andrew Jackson in the White House

“In this thoughtful, absorbing, and revelatory memoir, an important champion and defender of American democracy shows us how he became a national leader and, from his experiences on the inside, how close the Trump regime brought us to losing our system. Please read Adam Schiff’s book carefully and pay close heed to his warnings about the dangers that remain.”—Michael Beschloss, New York Times bestselling author of Presidents of War: The Epic Story, from 1807 to Modern Times