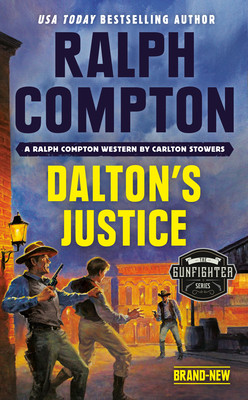 By Carlton Stowers, Ralph Compton
$7.99
Not in stock at store. Will, in most instances, ship from our warehouse in 7-10 days

It's been ten years since the worst day of Ben Dalton's life. After four grinding years of war, the Confederate veteran returned to his hometown of Aberdeen, Texas, to find that Mandy, the girl he loved, had run off with his best friend, John Rawlings. Dalton recovered from the loss and spent the next decade settling down to life as the town's marshal.

That quiet life is shattered with the arrival of one stunning telegram. Mandy begs her old friend to come to Fort Worth, where her lawyer husband has been arrested for murder. Without a second's hesitation, Dalton heads to the big city, where he will discover that the forces who want Rawlings convicted won't hesitate to commit a second murder to silence a visiting lawman.

Carlton Stowers is an award-winning journalist and the author of more than two dozen books, including Comanche Trail, which was named a finalist for both the Western Fictioneers and the Texas Institute of Letters best first novel awards. He lives in Cedar Hill, Texas.