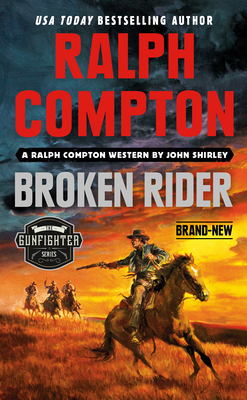 By John Shirley, Ralph Compton
$7.99
Not in stock at store. Will, in most instances, ship from our warehouse in 7-10 days

In this exciting new Ralph Compton western, a man without a memory meets an unforgettable ally: the one and only Bat Masterson.

Riding into the town of Smoky River on a mangy mule, Dane looks as broken down as his old mount. His Stetson is ragged, his boots are tied together with leather thongs, and he wears a Colt Army revolver with exactly three bullets. He wouldn't know what to say if you asked him where he got the gun, or how he learned to shoot it so well. He doesn't know if Dane is his first name or his last. Something happened that cost him much of his memory, and he can't remember what that something was. For three years he's been traveling the West as a cowboy, a buffalo hunter, a farmhand. Smoky River looks to be a fine place to settle down. If only his past didn't decide to catch up to him here. . .

John Shirley was born in Houston and now lives in Vancouver, Washington. He is the author of numerous novels and books of short stories, and he won the Bram Stoker Award for his collection Black Butterflies. His novels include the Specialist books (under the name John Cutter), The Brigade, Bleak History, the A Song Called Youth trilogy, and the novel of Wyatt Earp as a young lawman, Wyatt in Wichita. He has also written television shows, movies, and songs.