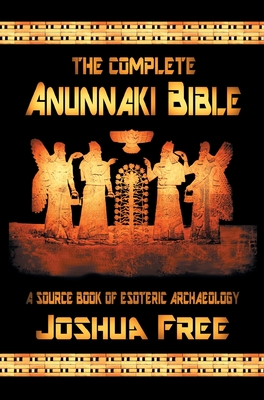 The Original Anunnaki Bible Discover the secret library of Sumerian cuneiform tablets kept by the oldest Babylonian mystery school of Mesopotamia and preserving the most ancient writings on the planet. The revised and updated 10th Anniversary Deluxe Edition of the Mardukite underground classic available to the public in an oversized hardcover for the first time

The Anunnaki Bible of Mesopotamia... Sumerians... Star-Gates of Babylon... The "Ancient Alien Gods"... Igigi "Watchers" of the Judeo-Christian Old Testament scriptures... Religion, mythology and magic of a long-lost forgotten age... all of it preserved and presented in this much anticipated 10th Anniversary revised and updated deluxe Infinity Edition of the complete Mardukite "Anunnaki Bible."

Joshua Free's "Anunnaki Bible" is quite simply a masterpiece of Mesopotamian magic, spirituality and history, providing a complete collection-a grand symphony of correlated materials-of the most ancient writings on the planet. The oldest Sumerian and Babylonian records reveal detailed accounts of cosmic history in the universe and on earth, the development of human history and descriptions of world order-all of which were used to maintain spiritual and physical control of humanity-proving to be the predecessor and foundation of global scripture-based religious and mystical traditions thereafter. These raw underground materials have shaped the existence of man's beliefs and traditions for thousands of years; right from the heart of the Ancient Near East: Sumer, Babylon and even Egypt

Nearly a decade since the modern Mardukite inception-and thousands of copies in print-the "Anunnaki Bible" is a revolutionary "New Age" advancement in authentic historical, spiritual and mystical research drawn from a unique unparalleled combination of archaeological findings and esoteric mystical magical traditions. Sumerian, Babylonian, Akkadian, Assyrian, Chaldean, Egyptian, Yezidic, Zoroastrian... and more. The heart and soul of humanity, from the cradle of civilization, is laid out clearly for the "Truth Seeker" to see-in its pure and undefiled state.

A wellsprings of hidden information and historical research, cuneiform tablet transliterations and translations, and mystical and spiritual experimentation may all be found within the leaves of this new anniversary edition of the underground bestselling classic Mardukite "Anunnaki Bible." Newly revised prefaces and tablet introductions guide the "Truth Seeker" through a beautiful presentation of the Ancient Mystery Tradition accessible to anyone with any background. You will discover the original secrets of Hermetic Tradition, the "Books of the Dead" and Underworld Mysteries, the origins of Yezidi literature and the books of Genesis and Enoch and even Dzyan... You will, if you dare, unlock the forgotten and forbidden power of the Anunnaki Babylonian Star-Gates-lore that predates and is a basis of Hebrew Kabbalah mysticism, from which much of the Western Magical Tradition is rooted.

Join thousands of others and take a Self-honest moment in life now, to invest yourself in the path of "true knowledge," where you may find the empowerment and enlightenment of "true experience" - true Gnosis.