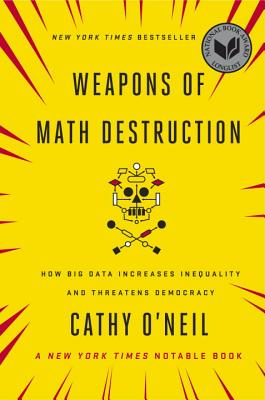 A former Wall Street quant sounds an alarm on the mathematical models that pervade modern life and threaten to rip apart our social fabric.

We live in the age of the algorithm. Increasingly, the decisions that affect our lives—where we go to school, whether we get a car loan, how much we pay for health insurance—are being made not by humans, but by mathematical models. In theory, this should lead to greater fairness: Everyone is judged according to the same rules, and bias is eliminated.

But as Cathy O’Neil reveals in this urgent and necessary book, the opposite is true. The models being used today are opaque, unregulated, and uncontestable, even when they’re wrong. Most troubling, they reinforce discrimination: If a poor student can’t get a loan because a lending model deems him too risky (by virtue of his zip code), he’s then cut off from the kind of education that could pull him out of poverty, and a vicious spiral ensues. Models are propping up the lucky and punishing the downtrodden, creating a “toxic cocktail for democracy.” Welcome to the dark side of Big Data.

Tracing the arc of a person’s life, O’Neil exposes the black box models that shape our future, both as individuals and as a society. These “weapons of math destruction” score teachers and students, sort résumés, grant (or deny) loans, evaluate workers, target voters, set parole, and monitor our health.

O’Neil calls on modelers to take more responsibility for their algorithms and on policy makers to regulate their use. But in the end, it’s up to us to become more savvy about the models that govern our lives. This important book empowers us to ask the tough questions, uncover the truth, and demand change.

Cathy O'Neil is a data scientist and author of the blog mathbabe.org. She earned a Ph.D. in mathematics from Harvard and taught at Barnard College before moving to the private sector, where she worked for the hedge fund D. E. Shaw. She then worked as a data scientist at various start-ups, building models that predict people’s purchases and clicks. O’Neil started the Lede Program in Data Journalism at Columbia and is the author of Doing Data Science. She is currently a columnist for Bloomberg View.

“O’Neil’s book offers a frightening look at how algorithms are increasingly regulating people… Her knowledge of the power and risks of mathematical models, coupled with a gift for analogy, makes her one of the most valuable observers of the continuing weaponization of big data… [She] does a masterly job explaining the pervasiveness and risks of the algorithms that regulate our lives.”
—New York Times Book Review

"Weapons of Math Destruction is the Big Data story Silicon Valley proponents won't tell.... [It] pithily exposes flaws in how information is used to assess everything from creditworthiness to policing tactics.... a thought-provoking read for anyone inclined to believe that data doesn't lie.”
—Reuters

“This is a manual for the 21st-century citizen, and it succeeds where other big data accounts have failed—it is accessible, refreshingly critical and feels relevant and urgent.”
—Financial Times

“Weapons of Math Destruction is an urgent critique of… the rampant misuse of math in nearly every aspect of our lives.”
—Boston Globe

“Illuminating… [O’Neil] makes a convincing case that this reliance on algorithms has gone too far.”
—The Atlantic

“A nuanced reminder that big data is only as good as the people wielding it.”
—Wired

“If you’ve ever suspected there was something baleful about our deep trust in data, but lacked the mathematical skills to figure out exactly what it was, this is the book for you.”
—Salon

“O’Neil is an ideal person to write this book. She is an academic mathematician turned Wall Street quant turned data scientist who has been involved in Occupy Wall Street and recently started an algorithmic auditing company. She is one of the strongest voices speaking out for limiting the ways we allow algorithms to influence our lives… While Weapons of Math Destruction is full of hard truths and grim statistics, it is also accessible and even entertaining. O’Neil’s writing is direct and easy to read—I devoured it in an afternoon.”
—Scientific American

“Readable and engaging… succinct and cogent… Weapons of Math Destruction is The Jungle of our age… [It] should be required reading for all data scientists and for any organizational decision-maker convinced that a mathematical model can replace human judgment."
—Mark Van Hollebeke, Data and Society: Points

“Indispensable… Despite the technical complexity of its subject, Weapons of Math Destruction lucidly guides readers through these complex modeling systems… O’Neil’s book is an excellent primer on the ethical and moral risks of Big Data and an algorithmically dependent world… For those curious about how Big Data can help them and their businesses, or how it has been reshaping the world around them, Weapons of Math Destruction is an essential starting place.”
—National Post

“Cathy O’Neil has seen Big Data from the inside, and the picture isn’t pretty. Weapons of Math Destruction opens the curtain on algorithms that exploit people and distort the truth while posing as neutral mathematical tools. This book is wise, fierce, and desperately necessary.”
—Jordan Ellenberg, University of Wisconsin-Madison, author of How Not To Be Wrong

“O’Neil has become [a whistle-blower] for the world of Big Data… [in] her important new book… Her work makes particularly disturbing points about how being on the wrong side of an algorithmic decision can snowball in incredibly destructive ways.”
—TIME

“O’Neil’s work is so important… [her] book is a vital crash-course in the specialized kind of statistical knowledge we all need to interrogate the systems around us and demand better.”
—Boing Boing

“Cathy O’Neil, a number theorist turned data scientist, delivers a simple but important message: Statistical models are everywhere, and they exert increasing power over many aspects of our daily lives… Weapons of Math Destruction provides a handy map to a few of the many areas of our lives over which invisible algorithms have gained some control. As the empire of big data continues to expand, Cathy O’Neil’s reminder of the need for vigilance is welcome and necessary.”
—American Prospect

“An avowed math nerd, O’Neil has written an engaging description of the effect of crunched data on our lives.”
—Hicklebee’s, San Francisco Chronicle

“By tracking how algorithms shape people's lives at every stage, O'Neil makes a compelling case that our bot overlords are using data to discriminate unfairly and foreclose democratic choices. If you work with data, or just produce reams of it online, this is a must-read.”
—ArsTechnica

“Lucid, alarming, and valuable… [O’Neil’s] writing is crisp and precise as she aims her arguments to a lay audience. This makes for a remarkably page-turning read for a book about algorithms. Weapons of Math Destruction should be required reading for anybody whose life will be affected by Big Data, which is to say: required reading for everyone. It’s a wake-up call – a journalistic heir to The Jungle and Silent Spring. Like those books, it should change the course of American society.”
—Aspen Times

"[O'Neil's] propulsive study reveals many models that are currently 'micromanaging' the US economy as opaque and riddled with bias."
—Nature

“You don’t need to be a nerd to appreciate the significance of [O’Neil’s] message… Weapons is a must-read for anyone who is working to combat economic and racial discrimination.”
—Goop

“Often we don’t even know where to look for those important algorithms, because by definition the most dangerous ones are also the most secretive. That’s why the catalogue of case studies in O’Neil’s book are so important; she’s telling us where to look.”
—The Guardian

“O’Neil is passionate about exposing the harmful effects of Big Data–driven mathematical models (what she calls WMDs), and she’s uniquely qualified for the task… [She] makes a convincing case that many mathematical models today are engineered to benefit the powerful at the expense of the powerless… [and] has written an entertaining and timely book that gives readers the tools to cut through the ideological fog obscuring the dangers of the Big Data revolution.”
—In These Times

“In this simultaneously illuminating and disturbing account, [O’Neil] describes the many ways in which widely used mathematic models—based on ‘prejudice, misunderstanding, and bias’—tend to punish the poor and reward the rich… She convincingly argues for both more responsible modeling and federal regulation. An unusually lucid and readable look at the daunting algorithms that govern so many aspects of our lives.”
—Kirkus Reviews (starred)

“Even as a professional mathematician, I had no idea how insidious Big Data could be until I read Weapons of Math Destruction. Though terrifying, it’s a surprisingly fun read: O’Neil’s vision of a world run by algorithms is laced with dark humor and exasperation—like a modern-day Dr. Strangelove or Catch-22. It is eye-opening, disturbing, and deeply important.”
—Steven Strogatz, Cornell University, author of The Joy of x

“This taut and accessible volume, the stuff of technophobes’ nightmares, explores the myriad ways in which largescale data modeling has made the world a less just and equal place.  O’Neil speaks from a place of authority on the subject… Unlike some other recent books on data collection, hers is not hysterical; she offers more of a chilly wake-up call as she walks readers through the ways the ‘big data’ industry has facilitated social ills such as skyrocketing college tuitions, policing based on racial profiling, and high unemployment rates in vulnerable communities… eerily prescient.”
—Publishers Weekly

"Not math heavy, but written in an exceedingly accessible, almost literary style; [O'Neil's] fascinating case studies of WMDs fit neatly into the genre of dystopian literature. There's a little Philip K. Dick, a little Orwell, a little Kafka in her portrait of powerful bureaucracies ceding control of the most intimate decisions of our lives to hyper-empowered computer models riddled with all of our unresolved, atavistic human biases."
—Paris Review

“Through harrowing real-world examples and lively story-telling, Weapons of Math Destruction shines invaluable light on the invisible algorithms and complex mathematical models used by government and big business to undermine equality and increase private power. Combating secrecy with clarity and confusion with understanding, this book can help us change course before it’s too late.”
—Astra Taylor, author of The People’s Platform: Taking Back Power and Culture in the Digital Age

"Weapons of Math Destruction is a fantastic, plainspoken call to arms. It acknowledges that models aren't going away: As a tool for identifying people in difficulty, they are amazing. But as a tool for punishing and disenfranchising, they're a nightmare.”
—Cory Doctorow, author of Little Brother and co-editor of Boing Boing

“Many algorithms are slaves to the inequalities of power and prejudice. If you don’t want these algorithms to become your masters, read Weapons of Math Destruction by Cathy O’Neil to deconstruct the latest growing tyranny of an arrogant establishment.”
—Ralph Nader, author of Unsafe at Any Speed

“In this fascinating account, Cathy O'Neil leverages her expertise in mathematics and her passion for social justice to poke holes in the triumphant narrative of Big Data. She makes a compelling case that math is being used to squeeze marginalized segments of society and magnify inequities. Her analysis is superb, her writing is enticing, and her findings are unsettling.”
—danah boyd, founder of Data & Society and author of It’s Complicated

"From getting a job to finding a spouse, predictive algorithms are silently shaping and controlling our destinies. Cathy O'Neil takes us on a journey of outrage and wonder, with prose that makes you feel like it's just a conversation. But it’s an important one. We need to reckon with technology.”
—Linda Tirado, author of Hand to Mouth: Living in Bootstrap America

“Next time you hear someone gushing uncritically about the wonders of Big Data, show them Weapons of Math Destruction. It’ll be salutary.”
—Felix Salmon, Fusion