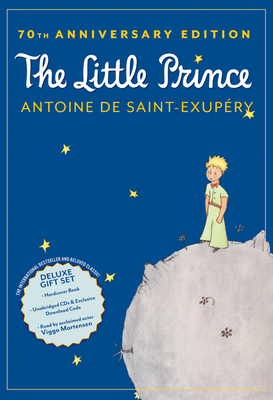 By Antoine de Saint-Exupéry, Richard Howard (Translated by)
$24.99
Not in stock at store. Will, in most instances, ship from our warehouse in 7-10 days

"One sees clearly only with the heart. Anything essential is invisible to the eyes."

Few books have been as universally cherished as The Little Prince, the haunting, lyrical fable that explores the very meaning of life. This deluxe seventieth anniversary gift set includes a hardcover book with the original full-color illustrations, along with two audio CDs (and exclusive download) of the unabridged text, narrated by Academy Award nominee Viggo Mortensen, beloved for his role as Aragorn in The Lord of the Rings trilogy. Rediscover the beloved story that begins with a simple picture and blossoms into a spellbinding adventure.

This title has been selected as a Common Core Text Exemplar (Grades 4-5, Stories).

Richard Howard is the author of eleven books of poetry, including Untitled Subjects, which won the Pulitzer Prize in 1970, and Trappings. He is the translator of more than 150 works from the French and lives in New York City.