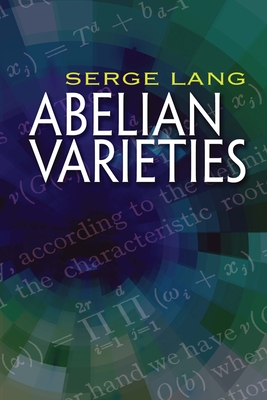 
May be on Backorder or may be Out of Print. May take a number of weeks to arrive if it arrives at all. We will confirm.
Based on the work in algebraic geometry by Norwegian mathematician Niels Henrik Abel (1802-29), this monograph was originally published in 1959 and reprinted later in author Serge Lang's career without revision. The treatment remains a basic advanced text in its field, suitable for advanced undergraduates and graduate students in mathematics. Prerequisites include some background in elementary qualitative algebraic geometry and the elementary theory of algebraic groups.
The book focuses exclusively on Abelian varieties rather than the broader field of algebraic groups; therefore, the first chapter presents all the general results on algebraic groups relevant to this treatment. Each chapter begins with a brief introduction and concludes with a historical and bibliographical note. Topics include general theorems on Abelian varieties, the theorem of the square, divisor classes on an Abelian variety, functorial formulas, the Picard variety of an arbitrary variety, the I-adic representations, and algebraic systems of Abelian varieties. The text concludes with a helpful Appendix covering the composition of correspondences.
Serge Lang (1927-2005) graduated from the California Institute of Technology and earned his Ph.D. in mathematics at Princeton in 1951. He taught at the University of Chicago, Columbia, and at Yale from 1972 until the end of his career. His research focused on geometry and number theory, but he taught and wrote books about many areas in mathematics, becoming one of the field's most prolific authors of advanced monographs.