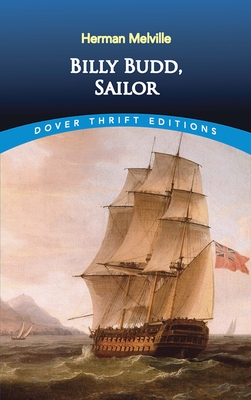 Cheerful, hardworking, and handsome, Billy is pressed into naval service aboard a British ship during the Napoleonic wars. The innocent and lovable young man quickly wins the hearts of all his comrades, save one: Claggart, the implacably bitter master-at-arms, who falsely accuses Billy of inciting mutiny. Rich in ambiguities, Herman Melville's haunting parable of the clash between good and evil raises thought-provoking issues related to the conflict between the requirements of the law and the needs of humanity.
This is the definitive edition of Melville's classic tale. Billy Budd, Sailor was discovered unfinished in the author's desk shortly after his 1891 death and remained unpublished until 1924. This text is the result of years of study and scrupulous research by Melville scholars. It offers students and other lovers of literature the best and most authentic version of the American storyteller's final masterpiece.

Herman Melville (1819-1891) found early success with stories inspired by his adventures in the South Seas. His fortunes declined with the 1851 publication of Moby-Dick, now recognized as a masterpiece but scorned by Melville's contemporaries. The author was obliged to work as a New York City customs inspector and died in obscurity, three decades before the critical reassessment of his work.