Le Ton Beau De Marot: In Praise Of The Music Of Language (Paperback) 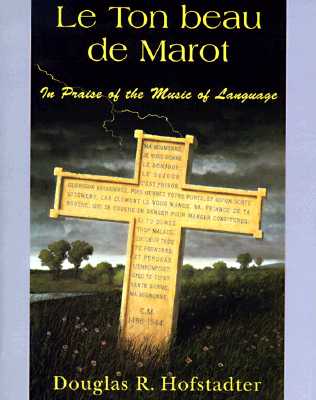 By Douglas R. Hofstadter
$53.99
Special Order, May be Out of Print

Lost in an art—the art of translation. Thus, in an elegant anagram (translation = lost in an art), Pulitzer Prize-winning author and pioneering cognitive scientist Douglas Hofstadter hints at what led him to pen a deep personal homage to the witty sixteenth-century French poet Clément Marot.”Le ton beau de Marot” literally means ”The sweet tone of Marot”, but to a French ear it suggests ”Le tombeau de Marot”—that is, ”The tomb of Marot”. That double entendre foreshadows the linguistic exuberance of this book, which was sparked a decade ago when Hofstadter, under the spell of an exquisite French miniature by Marot, got hooked on the challenge of recreating both its sweet message and its tight rhymes in English—jumping through two tough hoops at once.In the next few years, he not only did many of his own translations of Marot's poem, but also enlisted friends, students, colleagues, family, noted poets, and translators—even three state-of-the-art translation programs!—to try their hand at this subtle challenge.The rich harvest is represented here by 88 wildly diverse variations on Marot's little theme. Yet this barely scratches the surface of Le Ton beau de Marot, for small groups of these poems alternate with chapters that run all over the map of language and thought.Not merely a set of translations of one poem, Le Ton beau de Marot is an autobiographical essay, a love letter to the French language, a series of musings on life, loss, and death, a sweet bouquet of stirring poetry—but most of all, it celebrates the limitless creativity fired by a passion for the music of words.Dozens of literary themes and creations are woven into the picture, including Pushkin's Eugene Onegin, Dante's Inferno, Salinger's Catcher in the Rye, Villon's Ballades, Nabokov's essays, Georges Perec's La Disparition, Vikram Seth's Golden Gate, Horace's odes, and more.Rife with stunning form-content interplay, crammed with creative linguistic experiments yet always crystal-clear, this book is meant not only for lovers of literature, but also for people who wish to be brought into contact with current ideas about how creativity works, and who wish to see how today's computational models of language and thought stack up next to the human mind.Le Ton beau de Marot is a sparkling, personal, and poetic exploration aimed at both the literary and the scientific world, and is sure to provoke great excitement and heated controversy among poets and translators, critics and writers, and those involved in the study of creativity and its elusive wellsprings.