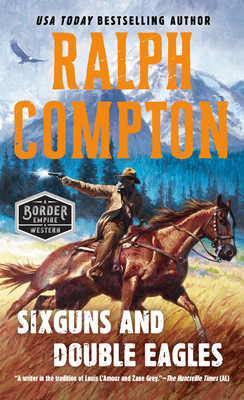 By Ralph Compton
$7.99
May be on Backorder or may be Out of Print. May take a number of weeks to arrive if it arrives at all. We will confirm.

This is book number 2 in the A Border Empire Western series.

Two young gunslingers ride into the heart of evil in this Ralph Compton western.

Nathan Stone was a legendary gunfighter who did everything he could to be a father—while still following his own violent trail of honor. Now Wes Stone, barely eighteen, but full of the hard wisdom of the West, is being drawn into the kind of fight that cost his father his life.

A secret organization of criminals is replacing freshly minted gold with counterfeit coins, threatening to plunge the growing nation into crisis. Called upon to penetrate this conspiracy that reaches from New Orleans to California, Wes and his fellow warrior, El Lobo, find themselves targeted by hired killers with a deadly plan of their own...

Praise for the novels of Ralph Compton

“Compton offers readers a chance to hit the trail and not even end up saddle sore.”—Publishers Weekly