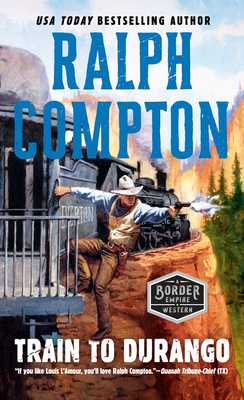 By Ralph Compton
$7.99
Not in stock at store. Will, in most instances, ship from our warehouse in 7-10 days

This is book number 3 in the A Border Empire Western series.

In this Ralph Compton western, a man with the courage to take a stand goes up against an outlaw cavalry that can't be stopped....

In Mexico, Wes Stone picked up his father’s gun, rode his father’s horse, and took on his father’s enemies. In California, he planted a band of savage criminals in the ground. Now Stone is heading up to the plains of Colorado, where a new kind of war has begun.

A dangerous band of mercenaries is going for the gold—enough to bankrupt the entire country. Their scheme: to raid four U.S. mints. Their weapon: an armored train tearing through the West like a fire-powered battle-ax on wheels.

From Durango to Dodge City, across a rugged land stained with blood, gold, and treachery, Stone follows a violent trail of honor. All that stands between victory and death is a quick-draw reflex—and the kind of .44-caliber justice that could tame the West and turn Stone into a legend.

“Compton may very well turn out to be the greatest Western writer of them all....Very seldom in literature have the legends of the Old West been so vividly painted.”—The Tombstone Epitaph