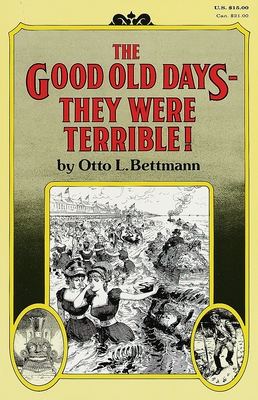 
Not in stock at store. Will, in most instances, ship from our warehouse in 7-10 days
The Good Old Days—were they really good? On the surface they appear to be so—especially the period to which this term is most often applied, the years from the end of the Civil War to the early 1900’s. This period of history has receded into a benevolent haze, leaving us with the image of an ebullient, carefree America, the fun and charm of the Gilded Age, the Gay Nineties.

But this gaiety was only a brittle veneer that covered widespread turmoil and suffering. The good old days were good for but the privileged few. For the farmer, the laborer, the average breadwinner, life was an unremitting hardship. This segment of the populace was exploited or lived in the shadow of total neglect. And youth had no voice. These are the people, the mass of Americans, whose adversities this book attempts to chronicle.
Otto L. Bettmann is the founder of the famed Bettmann Archive in New York, one of the world’s great picture libraries. Its resources, some three million prints and photographs, are used all over the world by publishers, educators, ad men and the audio-visual media.

Expelled during the Nazi regime from his post as Curator of Rare Books at the Prussian State Art Library in Berlin, Dr. Bettmann came to America in 1935 where he established the Archive and became widely known as a graphic historian. Among his previous publications are As We Were: Family Life in America, A Pictorial History of Medicine, Our Literary Heritage (with Van Wyck Brooks) and The Bettmann Portable Archive. Dr. Bettmann died in 1998.