The Source: How Rivers Made America and America Remade Its Rivers (Paperback) 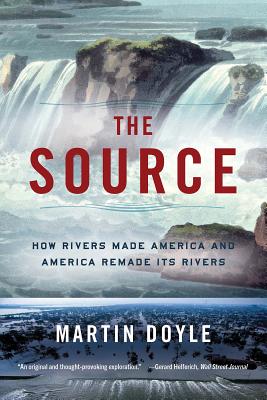 The Source: How Rivers Made America and America Remade Its Rivers (Paperback)

“An original and thought-provoking exploration of the sinuous course that water has carved through our economic and political landscape.” —Gerard Helferich, Wall Street Journal

In a powerful work of environmental history, Martin Doyle tells the epic story of America and its rivers, from the U.S. Constitution’s roots in interstate river navigation, to the failure of the levees in Hurricane Katrina and the water wars in the west. Through his own travels and his encounters with experts all over the country—a Mississippi River tugboat captain, an Erie Canal lock operator, a project manager buying water rights for farms along the Colorado River—Doyle reveals the central role rivers have played in American history and how vital they are to its future.

Martin Doyle is director of the Water Policy Program at the Nicholas Institute for Environmental Policy Solutions and a professor of river science and policy at Duke University’s Nicholas School of the Environment. He lives in North Carolina.

Move over Cadillac Desert and The Last Oasis: a new classic on American rivers has arrived.

Authoritative.… Even readers with an allergy to learning history will come away with a greater understanding of how rivers have literally made our country.
— Tracy Ross - Outside

The Source is one of those rare books you look up from and see with fresh eyes.