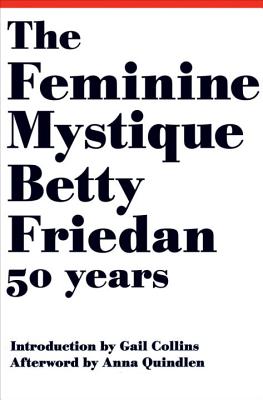 A 50th-anniversary edition of the trailblazing book that changed women’s lives, with a new introduction by Gail Collins.

Landmark, groundbreaking, classic—these adjectives barely do justice to the pioneering vision and lasting impact of The Feminine Mystique. Published in 1963, it gave a pitch-perfect description of “the problem that has no name”: the insidious beliefs and institutions that undermined women’s confidence in their intellectual capabilities and kept them in the home. Writing in a time when the average woman first married in her teens and 60 percent of women students dropped out of college to marry, Betty Friedan captured the frustrations and thwarted ambitions of a generation and showed women how they could reclaim their lives. Part social chronicle, part manifesto, The Feminine Mystique is filled with fascinating anecdotes and interviews as well as insights that continue to inspire. This 50th–anniversary edition features an afterword by best-selling author Anna Quindlen as well as a new introduction by Gail Collins.

Betty Friedan (1921–2006), a transformational leader of the women’s movement, founded the National Organization for Women (NOW) and authored many works, including The Second Stage, The Fountain of Age, and Life So Far.

Gail Collins, the best-selling author of When Everything Changed: The Amazing Journey of American Women from 1960 to the Present, is a national columnist for the New York Times. She lives in New York City.

Anna Quindlen is an award-winning columnist and novelist. She left journalism in 1995 to write fiction full time and has published three bestsellers. She lives in New York City.

The Feminine Mystique forever changed the conversation as well as the way women view themselves. If you’ve never read it, read it now and reflect on what our mothers and grandmothers were feeling at the time. It’s a great moment to celebrate this milestone work, which fundamentally altered the course of women’s lives.

Re-reading The Feminine Mystique, it exudes love for the human being, human spirit, and human potential. She wants mothers—indeed, all people—to "lean in" to life's work and not fear inevitable difficulties that arise when trying to "have it all" and juggle work and family. Overcome obstacles. Solve problems. Serve leftovers, she urges. Betty Friedan wrote The Feminine Mystique 50 years ago, but today her wisdom still merits sharing.

The Tupac Shakur of literary feminism, reincarnated at least once every decade with new insights that engender old beefs while at the same time serving as a reminder of why it’s a classic.
— Andi Zeisler - Salon