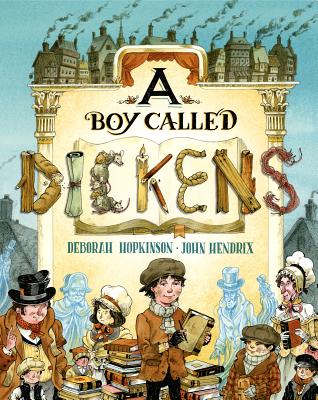 “Hopkinson and Hendrix weave an intriguing and informative narrative to show how Charles Dickens transformed from a young lad on the streets of London to one of the most well-known literary figures of all time. Learn how Dickens used his imagination and creativity to escape his dreary, misfortunate circumstances in this riveting tale.”
— Rebecca Moore, Hooray for Books!, Alexandria, VA

For years Dickens kept the story of his own childhood a secret. Yet it is a story worth telling. For it helps us remember how much we all might lose when a child's dreams don't come true . . . As a child, Dickens was forced to live on his own and work long hours in a rat-infested blacking factory. Readers will be drawn into the winding streets of London, where they will learn how Dickens got the inspiration for many of his characters. The 200th anniversary of Dickens's birth was February 7, 2012, and this tale of his little-known boyhood is the perfect way to introduce kids to the great author. This Booklist Best Children's Book of the Year is historical fiction at its ingenious best.

DEBORAH HOPKINSON is the author of Sky Boys: How They Built the Empire State Building, an ALA Notable Book and a Boston Globe-Horn Book Honor Book. Her Abe Lincoln Crosses a Creek, illustrated by John Hendrix, was an ALA Notable Book and a Junior Library Guild Selection. She is also the author of the ALA Notable Apples to Oregon. Her many other acclaimed titles include Under the Quilt of Night and Fannie in the Kitchen, recipient of four starred reviews.

JOHN HENDRIX's illustrations have appeared in The New Yorker, The New York Times, and Rolling Stone among other publications. He illustrated the chapter book How to Save Your Tail, by Mary Hanson, and the ALA Notable picture book Abe Lincoln Crosses a Creek, among others. His work has been recognized by the Society of Illustrators, American Illustration, and Communication Arts. He currently teaches illustration at Washington University in St. Louis. Learn more at JohnHendrix.com

Starred Review, Booklist, December 15, 2011:
“A fine introduction to the writer, and a terrific, completely un-preachy departure point for discussions of child labor and social reform.”

Starred Review, Kirkus Reviews, November 15, 2011:
"Both accessible and rich in simile and metaphor, this fictionalized biography concerns the budding novelist’s coming of age, as he ekes out a living (during his family’s stint in debtors’ prison) and pursues his dream."