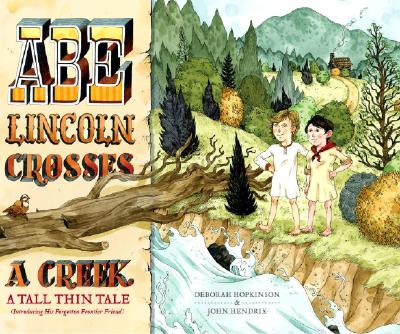 Now, I’m sure you know lots about Abraham Lincoln, the sixteenth president of the United States. But what you might not know is that Abe would never have become president if it hadn’t been for Austin Gollaher.

Learn the story of what really happened to Honest Abe when he was just a kid in this nonfiction picture book that's perfect for President's Day and every day!

The year is 1816. Abe is only seven years old, and his pal, Austin Gollaher, is ten. Abe and Austin decide to journey down to Knob Creek. The water looks scary and deep, and Austin points out that they don’t know how to swim. Nevertheless, they decide to traverse it. I won’t tell you what happens, but let’s just say that our country wouldn’t be the same if Austin hadn’t been there to help his friend.

“Rewarding on many levels, this high-spirited picture book is an engaging example of metafiction for the younger set.” —Booklist, Starred

“A lively, participatory tale. . . . This is a book you should add to your shelves.” —School Library Journal, Starred

“It’s a winner.” —The Bulletin, Starred

Deborah Hopkinson is the author of many highly acclaimed picture books, including Beatrix Potter and the Unfortunate Tale of a Borrowed Guinea Pig; Sky Boys: How They Built the Empire State Building, a Boston Globe–Horn Book Honor Book; and Abe Lincoln Crosses a Creek: A Tall, Thin Tale, an ALA-ALSC Notable Children’s Book. She lives in Oregon with her family. Visit her at deborahhopkinson.com.

John Hendrix has collaborated with Deborah Hopkinson on one previous title, A Boy Called Dickens, which was named a Booklist Editors’ Choice and a Bank Street College of Education Best Book of the Year. He has also written and illustrated several picture books, among them Miracle Man: The Story of Jesus; Shooting at the Stars; and John Brown: His Fight for Freedom. Learn more at johnhendrix.com.

Starred Review, School Library Journal, September 2008:
"What you can know for sure is that this is a book you should add to your shelves."

Starred Review, The Bulletin of the Center for Children's Books, October 2008:
"[J]ust how do you handle a legend? Deborah Hopkinson has found a way, and it's a winner."