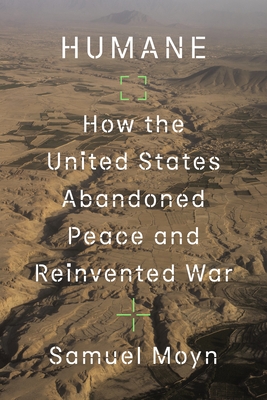 "[A] brilliant new book . . . Humane provides a powerful intellectual history of the American way of war. It is a bold departure from decades of historiography dominated by interventionist bromides." —Jackson Lears, The New York Review of Books

In the years since 9/11, we have entered an age of endless war. With little debate or discussion, the United States carries out military operations around the globe. It hardly matters who’s president or whether liberals or conservatives operate the levers of power. The United States exercises dominion everywhere.

In Humane: How the United States Abandoned Peace and Reinvented War, Samuel Moyn asks a troubling but urgent question: What if efforts to make war more ethical—to ban torture and limit civilian casualties—have only shored up the military enterprise and made it sturdier? To advance this case, Moyn looks back at a century and a half of passionate arguments about the ethics of using force. In the nineteenth century, the founders of the Red Cross struggled mightily to make war less lethal even as they acknowledged its inevitability. Leo Tolstoy prominently opposed their efforts, reasoning that war needed to be abolished, not reformed—and over the subsequent century, a popular movement to abolish war flourished on both sides of the Atlantic. Eventually, however, reformers shifted their attention from opposing the crime of war to opposing war crimes, with fateful consequences.

The ramifications of this shift became apparent in the post-9/11 era. By that time, the US military had embraced the agenda of humane war, driven both by the availability of precision weaponry and the need to protect its image. The battle shifted from the streets to the courtroom, where the tactics of the war on terror were litigated but its foundational assumptions went without serious challenge. These trends only accelerated during the Obama and Trump presidencies. Even as the two administrations spoke of American power and morality in radically different tones, they ushered in the second decade of the “forever” war.

Humane is the story of how America went off to fight and never came back, and how armed combat was transformed from an imperfect tool for resolving disputes into an integral component of the modern condition. As American wars have become more humane, they have also become endless. This provocative book argues that this development might not represent progress at all.

Samuel Moyn is the Henry R. Luce Professor of Jurisprudence at Yale Law School and a professor of history at Yale University. His books include The Last Utopia and Not Enough: Human Rights in an Unequal World.

"[A] brilliant new book . . . Moyn casts new light on much of the surrounding historical landscape . . . Humane provides a powerful intellectual history of the American way of war. It is a bold departure from decades of historiography dominated by interventionist bromides . . . [Moyn's] most original and incisive contribution to historical understanding is taking seriously the possibility of peace." —Jackson Lears, The New York Review of Books

"[Moyn] takes the reader on an excruciating journey, in incisive, meticulous and elegant prose, about the modern history of making war more legal, and in effect sanitizing it so that it can continue forever . . . [He] puts the whole issue in a tough, pragmatic perspective . . . The yearning to avoid war and yet make it more humane will . . . continue, rendering Moyn’s book timeless." —Robert D. Kaplan, The New York Times Book Review

"Smart and provocative . . . Arriving 20 years after 9/11, as the United States has withdrawn its troops from Afghanistan, Humane encourages readers to ask central questions too often lost amid the chatter of the foreign policy establishment." —Jennifer Szalai, The New York Times

"Moyn offers a sorely needed history of how war has become palatable . . . The brilliance of Moyn’s [book] is in how [it] wrest[s] control of the dominant narratives that have gripped the public imagination in the post-9/11 years, and in particular, the country after Trump." —Rozina Ali, American Prospect

"Moyn makes a deceptively simple and yet startlingly original argument . . . The contribution is ground-breaking and will likely become a seminal text-because of its content but also because it captures a generational moment." —Aurélie Basha i Novosejt, International Affairs

"An important book . . . [Humane] points out that Americans have made a moral choice to prioritize humane war, not a peaceful globe." —Dennis C. Jett, The Washington Post

"[Humane] is an important extension of themes [Moyn] has been developing since his critical account of 'human rights' in 2010’s The Last Utopia . . . One of Moyn’s greatest gifts as a scholar and a writer is his capacity to combine a carefully crafted historical narrative with both an analysis of political and legal discourse and a righteous anger at the abuses this discourse enables." —Jeanne Morefield, Jacobin

"Beyond being a meditation on the meaning of war, it is a history of the tension between pacifism and humanitarianism. In a culture that has come to valorize the latter, Moyn gives the former its due and pushes readers to think about how law can aid the cause of peace . . . Humane succeeds as a bracing reminder not to grow comfortable with war as a status quo." —Stephen Pomper, Foreign Affairs

"[A] learned and provocative book . . . The biggest value of Moyn’s book is the ethical questions he raises. Since war today has become so much less bloody, and involves so many fewer Americans, what is to stop it from becoming perpetual?" —Edward Luce, Financial Times

“In this profound and deeply disturbing book, Samuel Moyn shows how efforts to curb war's brutality—to make it more humane—find the United States today caught in a bind where war has become perpetual. As technology further dehumanizes war's conduct, this bind will become increasingly difficult to escape.” —Andrew Bacevich, president of the Quincy Institute for Responsible Statecraft

“Humane is a deeply original, powerfully argued, mind-changing book. I predict it will become an activist Bible for Gen Z, in the same way that Michael Walzer’s Just and Unjust Wars guided an earlier generation of anti-war thinkers and protesters.” —Anne-Marie Slaughter, CEO of New America

“This is what books are for: to change our minds. Samuel Moyn has written a surprising, sharp, and deeply compelling reflection on the price of making war humane.” —Daniel Immerwahr, author of How to Hide an Empire: A History of the Greater United States

“History at its finest, Samuel Moyn’s Humane recasts the iconic narratives of warfare, unearthing the ideas that led to today’s forever wars. Sweeping and rich in detail, Humane taps loudly at the conscience of the complacent, sounding a clarion call for peace.” —Karen Greenberg, author of Subtle Tools: The Dismantling of American Democracy from the War on Terror to Donald Trump

“We tend to think of the rise of humanitarian laws constraining the exercise of force as an unalloyed good. But Samuel Moyn’s stunning new book, Humane, fundamentally upends this conventional wisdom. In the process, Moyn also recovers the now long-forgotten abolitionist tradition, which sought to end war rather than to reform it. This profound historical retelling is an essential and groundbreaking contribution.” —Aziz Rana, author of The Two Faces of American Freedom

“In gripping prose, one of our boldest intellectuals and most trenchant critics upends the conventional stories that are told about law, progress, and war. Humane exposes the deceptive promise of humanization and its role in supporting the clinically legalized wars of our future. This book is a call for moral and political engagement that should be very widely read.” —Naz Khatoon Modirzadeh, founding director of the Harvard Law School Program on International Law and Armed Conflict

“This is a singularly important book by a singularly incisive thinker. How, Samuel Moyn asks, might we imagine a more moral, generous, efficacious, and just plain sensible approach to the end of violence and the alleviation of human suffering?” —Walter Johnson, professor of history at Harvard University and author of The Broken Heart of America: Saint Louis and the Violent History of the United States