Can't Even: How Millennials Became the Burnout Generation (Hardcover) 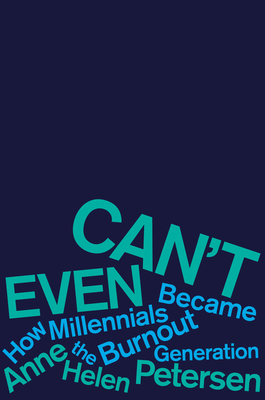 Can't Even: How Millennials Became the Burnout Generation (Hardcover)


Not in stock at store. Will, in most instances, ship from our warehouse in 7-10 days
A BEST BOOK OF THE FALL AS SEEN IN: Apartment Therapy • Book Riot • Business Insider • BuzzFeed • Daily Nebraskan • Entertainment Weekly • Esquire • Fortune • Harper’s Bazaar • HelloGiggles • LinkedIn • O Magazine • Time Magazine

“[A] razor sharp book of cultural criticism…With blistering prose and all-too vivid reporting, Petersen lays bare the burnout and despair of millennials, while also charting a path to a world where members of her generation can feel as if the boot has been removed from their necks.” —Esquire

“An analytically precise, deeply empathic book about the psychic toll modern capitalism has taken on those shaped by it. Can't Even is essential to understanding our age, and ourselves."—Ezra Klein, Vox co-founder and New York Times bestselling author of Why We're Polarized

An incendiary examination of burnout in millennials—the cultural shifts that got us here, the pressures that sustain it, and the need for drastic change

Do you feel like your life is an endless to-do list? Do you find yourself mindlessly scrolling through Instagram because you’re too exhausted to pick up a book? Are you mired in debt, or feel like you work all the time, or feel pressure to take whatever gives you joy and turn it into a monetizable hustle? Welcome to burnout culture.

While burnout may seem like the default setting for the modern era, in Can’t Even, BuzzFeed culture writer and former academic Anne Helen Petersen argues that burnout is a definitional condition for the millennial generation, born out of distrust in the institutions that have failed us, the unrealistic expectations of the modern workplace, and a sharp uptick in anxiety and hopelessness exacerbated by the constant pressure to “perform” our lives online. The genesis for the book is Petersen’s viral BuzzFeed article on the topic, which has amassed over seven million reads since its publication in January 2019.

Can’t Even goes beyond the original article, as Petersen examines how millennials have arrived at this point of burnout (think: unchecked capitalism and changing labor laws) and examines the phenomenon through a variety of lenses—including how burnout affects the way we work, parent, and socialize—describing its resonance in alarming familiarity. Utilizing a combination of sociohistorical framework, original interviews, and detailed analysis, Can’t Even offers a galvanizing, intimate, and ultimately redemptive look at the lives of this much-maligned generation, and will be required reading for both millennials and the parents and employers trying to understand them.
A former senior culture writer for BuzzFeed, Anne Helen Petersen now writes her newsletter, Culture Study, as a full-time venture on Substack. Petersen received her PhD at the University of Texas at Austin, where she focused on the history of celebrity gossip. Her previous books, Too Fat, Too Slutty, Too Loud and Scandals of Classic Hollywood, were featured in NPR, Elle, and the Atlantic. She lives in Missoula, Montana.

Amazon's Top Ten Editor's Best of the Month picks for September   “Brilliant… Although Petersen wrote this before the pandemic, candidly talking about burnout culture that has now been impacted by two recessions, it’s more timely than ever.” —Apartment Therapy   “[A] razor sharp book of cultural criticism…With blistering prose and all-too vivid reporting, Petersen lays bare the burnout and despair of millennials, while also charting a path to a world where members of her generation can feel as if the boot has been removed from their necks.” —Esquire  "Whether you’re looking for solutions or just looking to feel seen, Can’t Even is a can’t-miss." —Harper's Bazaar, "27 Best Books of 2020"   "Petersen’s third book, a highlight-every-sentence-in-recognition survey of the anxiety and exhaustion baked into the lives of myriad young people, dispels many of the myths and misconceptions—the laziness! the entitlement!—surrounding the generation that came of age amid the internet and economic collapse. Yet rather than pit millennials against boomers, Petersen makes meaningful and constructive connections between the toils and troubles of the two groups." —O Magazine   "We think of capitalism as a way of organizing an economy. But given enough time, it goes beyond that: It organizes our lives, our hopes, our relationships. Anne Helen Petersen has written an analytically precise, deeply empathic book about the psychic toll modern capitalism has taken on those shaped by it. Can't Even is essential to understanding our age, and ourselves."—Ezra Klein, Vox co-founder and New York Times bestselling author of Why We're Polarized    "Can't Even is the Nickel and Dimed of this generation. A cogent and sober analysis of the economic lives that decades of precarity has wrought, told in Petersen's smart, measured style."—Tressie McMillan Cottom, assistant professor of sociology at the University of North Carolina and author of the National Book Award finalist Thick: And Other Essays      "Reading this incredible book, I had the overwhelming feeling of someone arranging the chaotic fragments of my life into a cohesive whole. Can’t Even felt like a field guide, a mirror, and an absolution. Compassionate, wise, and incisive, it is a defining work about a generation defined by work." —Ed Yong, writer, The Atlantic and New York Times bestselling author of I Contain Multitudes  "Can't Even is a compelling exploration of the phenomenon of burnout and how an entire generation has been set up to fail. As a Millennial, reading this book was a deeply cathartic experience. Anne Helen Petersen articulates the struggles and motivation of a generation so impeccably. Reading this book made me feel like finally, someone understands me. I wish I could give this book to everyone I know." —Taylor Lorenz, culture reporter, New York Times    "Trenchant and well-researched...an incisive portrait of a generation primed for revolt." —Publishers Weekly   "In a cultural moment rife with inter-generational sparring ("OK, Boomer"), and with millennials garnering criticism for their transi —