A Match Made in Mehendi (Hardcover) 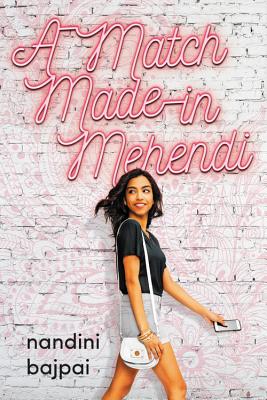 A Match Made in Mehendi (Hardcover)


Not in stock at store. Will, in most instances, ship from our warehouse in 7-10 days
For fans of Brandy Colbert and Jenny Han comes a lighthearted novel about tradition, high school social hierarchy, matchmaking, and swiping right (or left!)
Fifteen-year-old Simran "Simi" Sangha comes from a long line of Indian vichole -- matchmakers -- with a rich history for helping parents find good matches for their grown children. When Simi accidentally sets up her cousin and a soon-to-be lawyer, her family is thrilled that she has the "gift."

But Simi is an artist, and she doesn't want to have anything to do with relationships, helicopter parents, and family drama. That is, until she realizes this might be just the thing to improve her and her best friend Noah's social status. Armed with her family's ancient guide to finding love, Simi starts a matchmaking service -- via an app.

But when she helps connect a wallflower of a girl with the star of the boys' soccer team, she turns the high school hierarchy topsy-turvy, soon making herself public enemy number one.
Nandini Bajpai grew up in New Delhi, India, before settling in the Boston area with her husband, kids, and a fluctuating number and variety of pets. She has published a YA novel, Red Turban White Horse, with Scholastic India. A Match Made in Mehendi would be her U.S. debut.

"This sweet contemporary promises to be packed full of family and friendship drama."—BuzzFeed

* "A rousing story that is as enjoyable as it is heartfelt. [Nandini] Bajpai creates a memorable character in Simi, who shines at the center of the matchmaking web as she narrates this winning romance."—Publishers Weekly, starred review

"Simi is confident, principled, and unapologetic, and her voice glitters with optimism and honesty. A sweet and quirky romance told by a protagonist who will steal readers' hearts."—Kirkus Reviews

"Bajpai creates a strong, sympathetic portrayal of Simi and her close-knit Indian American family. Many readers will enjoy this engaging first-person narrative, which ends with a promising romance."—Booklist